My recent post on arsenic got me thinking about silly chemical names.  There are, in fact, a 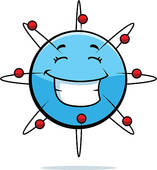 number of compounds that contain arsenic that chemists have clearly named with great glee.  In fact it seems quite likely that some of them were even deliberately synthesized purely for the opportunity to get a naughty-sounding word into a chemical name.  But it goes way beyond arsenic: there are many, many molecules with quite frankly ridiculous names.

So with such childishness in mind, here’s my top ten of silly substances:

1.  Adamantane
I have to confess that when I first met this molecule at university I though the lecturer was

joking.  He wasn’t, this rather odd-looking cycloalkane is a real molecule.  It’s existence was first suggested in 1924 but it wasn’t actually made until 1941 – either way it preceded the 1980s pop star by some years.  The arrangement of the atoms in adamantane is like those in diamond, and that’s where its name comes from: the Greek adamantinos, meaning relating to diamond or steel.  In itself adamantane doesn’t have many uses, but its derivatives are important in drug synthesis.

2.  Megaphone
YES THERE REALLY IS A MOLECULE CALLED MEGAPHONE!  It gets its name not because it’s loud, but because it’s extracted from the plant Aniba megaphylla.  It’s interesting because it has been shown to inhibit the growth of certain tumour cells.

3.  Arsole
Please remember I didn’t come up with this, it’s a real molecule.  It contains, not

surprisingly, arsenic and has the rather simple formula of C4H4AsH in, ho ho, a ring-shaped structure.  It’s actually never been isolated experimentally itself but, and this just gets better and better, a class of similar molecules called arsoles have been investigated.  Arsole bonded to a benzene ring would be called benzarsole.  Ok I’ll stop now.

On the subject of acids, honourable mention must also go to the wonderfully-named triflic acid, which sounds like something you might extract from a triffid.  It’s not obviously, but it’s still quite interesting stuff, being one of the strongest acids.  In fact it’s a superacid, which makes it sound a bit like a superhero’s deadly nemesis.

5.  Cummingtonite
This sounds like the sort of tortured name someone might invent for cocktail happy hour, but in fact it’s a greeny-brown mineral with the rather spectacular formula of (Mg,Fe)7Si8O22(OH)2.  It gets its name from the town of Cummington, Massachusetts (wouldn’t you love to live there?), where it was first discovered in 1824.

You have to love this one.  The molecule actually looks like a child’s drawing of a window.  It’s more properly called fenestrane (from the Latin word for window, fenestra), and while it’s never been synthesised itself a version with a corner carbon missing has been made and, naturally, goes by the name ‘broken window’.

7.  Curious chloride
Isn’t this just the cutest thing?  Someone should write a children’s book.  CmCl3 is more properly named curium trichloride but ‘curious’, or ‘curous’, is the trivial name for curium compounds.  A concentrated solution of curious chloride would be radioactive enough to boil itself if left alone.  Maybe not so child-friendly, then.

Funny to us Brits, probably meaningless to an American, this reddish-black mineral was named after Wilfred R. Welsh, an amateur mineralogist from New Jersey.  He was a president of the Franklin Mineral Museum and this mineral was named in his honour by one of his former students.

9.  Fucitol
This sounds like something a student might say at the end of a long Friday in the laboratory, and funnily enough it’s also an alcohol.  It’s officially known, more boringly, as L-fucitol, 6-deoxy-L-galactitol.  It gets its silly-sounding trivial name because it comes from fucose, which is found in a North Atlantic seaweed with the Latin name Fucus vesiculosus (and the almost equally brilliant common name, bladderwrack).

What else could I end the list with?  DEAD is the apt acronym for diethyl azodicarboxylate.  This wonderful orange stuff is rather unstable: it’s shock sensitive, light sensitive, toxic and a possible carcinogen and will explode violently if its pure form is heated above 100 degrees C.  When it’s mixed with acid and triphenylphosphine the result is called DEADCAT – brilliant.  DEAD used to be used in quite a few chemical syntheses, but thanks to its impressive list of safety hazards these uses are declining.

For even more silly-named molecules, see http://www.chm.bris.ac.uk/sillymolecules/sillymols.htm – what’s your favourite?