I don’t find time for huge amounts of television these days, and certainly not adverts. But I recently caught an advert for Dove Oxygen Shampoo out of the corner of my eye, and it brought me up short. Of course, beauty products are full of nonsense generally. Think, for example, of L’Oreal’s famous ingredient, ‘Boswelox’. (A word which, thanks to the wonderful Karl Pilkington, has since acquired a whole new meaning.) A little while ago I wrote a post about a toothpaste that was claiming to contain ‘liquid calcium’ (if it were true, cleaning your teeth would be much more exciting, trust me). It’s just par for the course. Really, is there any point wasting valuable energy continuing to be annoyed by these things?

Well yes, actually. Because this kind of silly hogwash just reinforces the ridiculous ‘science is so terribly hard, oooh aren’t all the complicated words impressive?’ attitude that is so frustratingly prevalent in the world today.

Besides which, picking apart this kind of thing is practically the reason for the existence of this blog. So here goes.

And clicking through a bit further:

“[the shampoo] provides conditioning ingredients fused with oxygen as it instantly dissolves on your hair and breathes life into it.”

Let’s start with that last sentence. Firstly: it dissolves on your hair? What does that mean? I’m just going to mention here that the meaning of the word dissolve is taught in year 7 (first year, in old money) science in all secondary schools in this country, and has been for many, many years. So everyone should know it, even the employees of the media company that came up with this tosh. (If you don’t, and you’ve ever muttered anything whatsoever about slipping standards and/or grade inflation, shame on you.)

‘Dissolve’ usually refers to solids. Salt dissolves in water. Sugar dissolves in tea (yes all right, also mostly water). It means that the solid becomes incorporated into the liquid, forming a solution. I haven’t checked, but I’m assuming Dove’s shampoo is not solid, as that would make it rather difficult to get out of the bottle.

Ok, oils and fats dissolve in certain solvents (not water mind you), and they could feasibly be liquid and yet the word still applies. True enough. It’s possible that the original text was ‘dissolves the grease on your hair’ (more or less accurate enough), and some marketing guy said, ‘I like really love it, I really reaaaahhhly do, but can we just lose two words from the middle?’

And yes, I think it’s safe to assume their shampoo mixes with water, because that is quite an important feature of shampoo, but they haven’t said ‘dissolves in the water’, they’ve said ‘dissolves on the hair’, which does sort of give the impression that it’s your hair that’s somehow dissolving the shampoo. Which is just weird.

But misuse of the world dissolve is only a minor irritation. No, my bigger problem is ‘ingredients fused with oxygen’. What the Dove does that mean?

For years and years we’ve been told that oxidants are bad. Or at least, that antioxidants are good (although this hasn’t really been backed up by scientific studies).

Is it difficult to work out that oxygen is an oxidant? It’s the granddaddy of oxidants. It’s the oxidant that all the other oxidants were named after. Oxy/oxi – see?

Chemists have two definitions of oxidation, but they’re broadly equivalent. Oxidation can be thought of as gaining oxygen, or it can be thought of as loss of electrons. Electrons are the negatively-charged particles that surround atoms. I mention them because the phrase ‘free radicals’ often turns up in the same breath as ‘antioxidants’. Free radicals are atoms or molecules which have an unpaired electron. Electrons like to be paired up. They REALLY like to be paired up. When they’re not, they’ll do pretty much anything they can to get paired up. Unpaired electrons are, if you like, the desperate guy at the nightclub at the end of the night. This makes them incredibly reactive, which means they can cause cell damage.

Worse, this happens in a chain reaction – meaning that a single free radical can do an awful lot of harm. So where to antioxidants come in? Well, antioxidants react with free radicals and essentially stop them in their tracks. 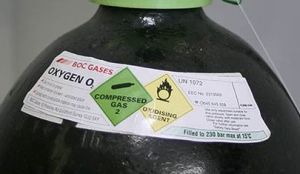 Don’t suck on this.

Jolly good. But you see where I’m going here? Oxygen is the complete opposite of this. Yes, we breathe oxygen. It’s quite important stuff. Certainly, if you run out of it you’re in trouble. But it’s far from harmless. The air we breathe is only about twenty-one percent oxygen. Too much oxygen is flat-out dangerous. Breathe air with something like 50% oxygen for any length of time and you risk damaging your lungs, eyes and central nervous system. Really. Hospitals control oxygen use very carefully, and scuba divers who use it have to undergo rigorous training. The fad for oxygen bars has caused real concern in some quarters.

What does ‘ingredients fused with oxygen’ mean? Does it mean Dove have somehow dissolved oxygen in their shampoo? I’m certain that it doesn’t, because this wouldn’t be stable, and it would likely cause your shampoo to ‘go off’ in some way very quickly. Does it mean that their shampoo contains an ingredient that releases oxygen somehow? Hydrogen peroxide famously does this, when it breaks down into oxygen and water. Of course hydrogen peroxide is used to bleach hair, so… probably not (and anyway, again, not stable).

I looked up the ingredients in Dove Oxygen Moisture shampoo (and I’ve reproduced them below). To be honest, looking at the list I’m drawing a blank. My suspicion is that they’re using ‘oxygen’ simply because it’s the latest trendy thing. Oxygen is common enough – water contains one atom of oxygen in every molecule for starters, so they’re safe with the idea that the shampoo contains oxygen in some form – just not elemental oxygen.

Table sugar (sucrose) – perhaps we should wash our hair with this?

I’ve picked that one out of the list partly because it has ‘hydroxy’ in its name. Now in reality, that just means it contains an -OH group or several. This isn’t anything particularly special, table sugar has eight of ’em. Guar hydroxypropyltrimonium chloride comes from guar gum, which in turn is made from guar beans. Guar gum is a food additive that’s used to thicken foods, and it turns up all over the place (check your salad dressing or ice cream).

Guar hydroxypropyltrimonium chloride has been shown to have conditioning properties, which explains its inclusion in shampoo (this is my other reason for picking it out). It probably does leave your hair feeling nice and soft. And it does have several -OH groups, so it arguably sort of works with the ‘conditioning ingredients fused with oxygen’ claim. In the sense that it has oxygen atoms chemically bonded to it. As does, you know, water.

There’s no way that it releases oxygen though. Now in fairness to Dove, that claim isn’t actually made explicitly anywhere, although the lovely bubbly imagery does its damnedest to imply it.

And here’s the thing: even if you could, would you want to routinely use a product that releases oxygen directly onto your skin or hair? Given that oxygen is an oxidising agent, and is likely to cause cell damage in high concentrations? Just bear in mind what happens to hair that’s exposed to too much hydrogen peroxide.

And don’t even get me started on the dozens and dozens of moisturisers that claim to do the same. Really? Straight into your skin? There are even some products that claim to do both at once, which frankly is jolly clever. In the Doctor Who sense of clever. I.e. fictional.

But what I want to know is this: after years of anti-oxidant this, and anti-oxidant that, how have we managed to go in exactly the opposite direction without consumers saying ‘er, hang on a minute, surely this has to be a load of old boswelox?’