We’re half way thorough the Rio 2016 Olypics, and it will have escaped no one’s notice that there have been a few little problems with one of the pools. 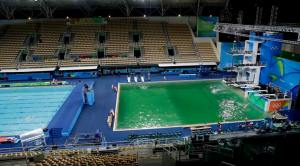 First, the water turned a mysterious green colour. Then there were reports of a ‘sulfurous’ smell, with German diver Stephan Feck reported as saying it smelled like a “fart”.

The diving pool seemed to be the worst affected, but the water-polo pool next to it also suffered problems, and competitors complained of stinging eyes.

So what on earth was happening? An early suggestion was that copper salts were contaminating the water. It’s not unheard of for copper compounds to get into water supplies, and it would certainly explain the colour; copper chloride solutions in particular are famously greeny-blue. But what about that sulfurous smell? Copper chloride doesn’t smell of sulfur.

Was the strange pool colour due to an algae bloom, like this one in Lake Erie?

The most likely culprit was some sort of algae bloom – in other words rapid algae growth – with the smell probably coming from dimethyl sulfide, or DMS. There’s a singled-celled phytoplankton called Emiliania huxleyi which is particularly famous for producing this smelly compound. In fact, it actually has more than one very important role in nature: the smell is thought to alert marine life that there’s food nearby, but it also seeps into the atmosphere and helps with cloud formation, helping to control our planet’s temperature. Without these reactions, Earth might not be nearly so habitable.

But how did algae manage to grow in the pool? The pool chemicals should have prevented it, so what had happened? An Olympic official then went on to make the comment that “chemistry is not an exact science,” which of course led to much hilarity all around. Chemistry is, after all, incredibly exact. What chemistry student doesn’t remember all those calculations, with answers to three significant figures? The endless balancing of equations? The careful addition of one solution to another, drop by drop? How much more ‘exact’ would you like it to be?

But I had a bit of sympathy with the official, because I suspect that what they actually meant – if not said – was that swimming pool chemistry is not an exact science. And while that, too, is hardly accurate, it is true that swimming pool chemistry is very complicated and things can easily go wrong, particularly when you’re trying to work on an extremely tight schedule. They could hardly, after all, close down all the pools and spend several days carrying out extensive testing in the middle of the sixteen-day-long Olympic Games.

When a pool is first built and filled, things are, theoretically, simple. You know exactly how many cubic litres of water there are, and you know exactly how much of each chemical needs to be added to keep the water free of bacteria and other nasties. Those chemicals are added, possibly (particularly in a pool this size) via some kind of automated system, and the pH is carefully monitored to ensure the water is neither too alkaline (basic) nor too acidic.

There’s a certain amount of proprietary variation of swimming pool chemicals, but it essentially all comes down to chlorine, which has been used to make water safe now for over 120 years.

Originally, water was treated to make it alkaline and then chlorine gas itself was added. This produced compounds which killed bacteria, in particular sodium hypochlorite, but the practice was risky. Chlorine gas is extremely nasty stuff – it has, after all, been used as a chemical weapon – and storing it, not to mention actually using it, was a dangerous business.

However, hundreds of people swimming in untreated water is a recipe for catching all kinds of water-borne disease, so it wasn’t long before alternatives were developed. 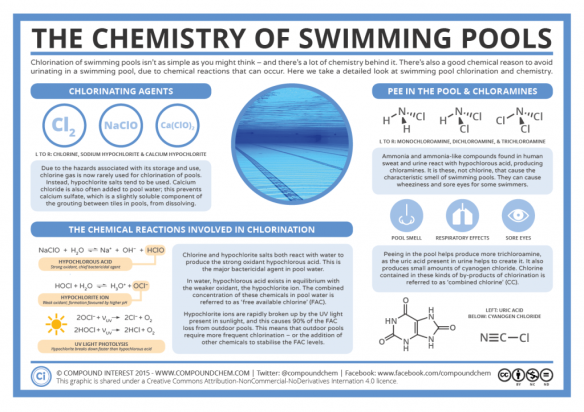 Those alternatives made use of the chemistry that was happening anyway in the water, but  allowed the dangerous bit, with the elemental chlorine, to happen somewhere else. And so hypochlorite salts began to be manufactured to be used in swimming pools.

As the lovely graphic from Compound Interest illustrates, sodium hypochlorite reacts with water to form hypochlorous acid, which in turn goes on to form hypochlorite ions. These two substances sit in an equilibrium, and both are oxidants, which is good because oxidants are good at blasting bacteria. The equilibria in question are affected by pH though, which is one reason why, quite apart from the potential effects on swimmers, it’s so important to manage the pH of pool water.

There are a couple of different chemicals which can be added to adjust pH. Sodium bicarbonate, for example, can be used to nudge the pH up if needed. On the other hand, sodium bisulfate can be used to lower pH if the water becomes too alkaline.

UV light breaks down the chemicals that are used to keep swimming pool water clean.

This can all be managed extremely precisely in an unused, enclosed pool. But once you open that pool up, things become less simple. Open-air pools have a particular problem with UV light. Chlorine compounds are often sensitive to UV – this is why CFCs are such a problem for the ozone layer – and hypochlorite is no exception. In the presence of UV it breaks down in a process called photolysis to form chloride ions and oxygen. This means that outdoor pools require more frequent treatments, or the addition of extra chemicals to stabilise the ‘free available chlorine’ (FAC) levels.

Sadly, I haven’t managed to make it over to Rio, but from what I’ve seen the Aquatic Centre has a roof which opens up, which means that the pool water is indeed being exposed to UV light.

So perhaps the chemical levels simply dropped too low, which allowed algae to proliferate? Possibly aggravated by environmental conditions? Indeed, initially this seemed to be the explanation. FINA, the international governing body of aquatics, issued a statement on Wednesday afternoon which said:

“FINA can confirm that the reason for the unusual water color observed during the Rio diving competitions is that the water tanks ran out of some of the chemicals used in the water treatment process. As a result, the pH level of the water was outside the usual range, causing the discoloration. The FINA Sport Medicine Committee conducted tests on the water quality and concluded that there was no risk to the health and safety of the athletes, and no reason for the competition to be affected.”

This prompted people to wonder how on earth chemical levels were allowed to run out in an event as significant as the Olympics – did someone forget to click send on the order? – but still, it seemed to explain what had happened.

Until today (Sunday), when more information surfaced as Olympic officials announced that they were going to drain at least one of the swimming pools and refill it. This is no small feat and will involve considerable cost: after all, we’re talking about millions of gallons of water. But it seems to be necessary. As Rio 2016’s director of venue management Gustavo Nascimento said:

“On the day of the Opening Ceremonies of the Games, 80 litres of hydrogen peroxide was put in the water. This creates a reaction to the chlorine which neutralises the ability of the chlorine to kill organics. This is not a problem for the health of anyone.”

Whoops. Yes indeed. Hydrogen peroxide reacts with chlorine to produce oxygen and hydrochloric acid. In fact, hydrogen peroxide is actually used to dechlorinate water which contains levels of chlorine that are too high. It might not be the very worst thing you could add to the water (when you think of all the things that could end up swimming pools) but it’s definitely up there.

Why and how this happened doesn’t, at the moment, appear to be clear. Presumably someone is for the high jump, and not just on the athletics field.