“Refined” sugar is almost entirely made up of a molecule called sucrose.

One substance that regularly gets a bashing is sugar, particularly so-called “refined” sugar. We’re told it’s toxic (it’s not), it’s more addictive than cocaine (it isn’t) and we should definitely all be trying to give it up.

Now, before I go any further with this, a word about healthy eating. I’m not a dietician. I don’t even claim to be a nutritionist (although I could, if I wanted). However, I think I’m on fairly safe ground if I say that we should all be striving for a healthy, balanced diet. That is, a diet containing a broad range of foods, plenty of fruits and vegetables, healthy amounts of protein and some good fats.

A lot of people have diets that fall short of this ideal. Cutting back on foods which contain a lot of added sugar (cakes, chocolate, fizzy drinks, etc) and eating more vegetables and fruits is a good, and sensible, course of action.

Which brings us to ITV’s Sugar Free Farm.

Page 81 of the current issue of Radio Times tells us that the celebrities face a “completely sugar-free regime”.

This is actually the second series of this show, which first aired last year. According to the 7-13th January 2017 issue of the Radio Times:

“Seven celebrities who admit to terrible diets succumb to a few weeks of hard farm labour and a completely sugar-free regime (so no white carbs or fruit, let alone chocolate).”

Hm. Now, I’ve written about sugar more than once before, but to save clicking back and forth, here’s another quick summary:

Sugar is not one thing. The chemistry of sugars is quite complicated, but a human being trying to understand the food they eat probably needs to be aware of three main types, namely: glucose, fructose and sucrose.

Glucose is the sugar that all your cells need. Not having enough glucose in your bloodstream is called hypoglycaemia, and the result is seizure, coma and ultimately death. This isn’t a risk for healthy people without pre-existing conditions (like diabetes, for example) because evolution has put some clever safety-nets in place. First, our bodies are extremely efficient at carrying out the necessary chemistry to turn the molecules we eat into the molecules we need. Should that fail, our bodies are very good at storing nutrients to use in times when our diet doesn’t supply them. If you don’t eat glucose, your body will break down other foods to produce it, then it’ll start on your glycogen stores, move on to fat stores, and eventually start breaking down protein (i.e. the stuff in your muscles). This means that unless you stop eating completely for a fairly long period of time, you’ll survive.

Still, I think it’s important to emphasise the point: glucose is essential for life. The suggestion that this substance is “toxic” and thus should be completely eliminated from our diets is really, when you think about it, a bit odd.

Ah but, I hear some people saying, no one is saying that glucose is toxic! They’re talking about refined sugar!

Fine. So what’s “refined” sugar? In simple terms, it’s pure sucrose. And sucrose is just a molecule made from a unit of glucose stuck to a unit of fructose. As I said, our bodies are really good at breaking up the molecules we eat into the molecules we need: our cells can’t use sucrose for energy, so all that happens is that it more or less instantly gets broken up into glucose and fructose.

Refined sugar is, basically, half glucose and half fructose, and it’s no more dangerous or “toxic” than either of those substances. And while I’m here, “natural” sugar options are little different: honey, for example, contains similar ratios of fructose and glucose.

Allrighty then, what’s fructose? Fructose is another simple sugar, and it’s the one that plants produce. For that reason it’s sometimes called “fruit sugar”.

Our cells can’t use fructose for energy, either. But, same thing again: if you eat it your body will still use it. In this case, your liver does the heavy lifting; changing fructose into glucose and other substances, some of which are fats. On the one hand, this is a slower process so you don’t get the blood sugar spike with fructose that you get with glucose. On the other, some of the fructose you eat inevitably ends up being converted into fat.

As I mentioned, fructose is the sugar in plants. It’s found in almost all plant-based foods. For example, the USDA food composition database tells us that 100 g of carrots contains about 0.6 g of fructose. Perhaps surprisingly, broccoli contains slightly more: about 0.7 g per 100 g. Iceberg lettuce contains even more, at 1 g per 100 g, whereas green peas contain a mere 0.4 g.

Even a small serving of fruit juice usually contains at least 150 g.

None of this comes close to fruit. Apples contain about 6 g of fructose per 100 g, grapes 4 g and bananas 5 g. Dried fruit, as you’d expect, has considerably higher amounts by weight – because the water’s gone. Juices have similar amounts of fructose per unit of weight but, of course, you tend to drink a lot more than 100 g of juice at a time.

Now we understand why “Sugar Free Farm” has banned fruit. But this is why I have a problem with the title: you CAN’T eat an entirely “sugar-free” diet, unless all you eat is meat, fish, eggs and dairy products like cream and butter (but not milk, which contains lots of another sugar: lactose). This would be a far from healthy diet, seriously lacking in fibre as well as a host of vitamins and minerals (even “phase 1” or the “induction” period of the controversial Atkins diet isn’t quite this extreme).

The show hasn’t aired yet, and I admit I didn’t watch it last year, so I don’t know if that’s what they’re doing. But I seriously doubt it – it would be unethical and irresponsible. Plus, the words “white carbs” in the listings blurb make me suspicious. Why specify “white”? Are whole grains included? And what about pulses? Whole grain foods might be relatively low in fructose and glucose before you put them in your mouth, but as soon as saliva hits them the starch they contain is broken down into…. glucose. By the time you swallow that chewed-up food, it contains sugar.

In summary, Sugar Free Farm is almost certainly not sugar free. What they appear to have set up is a place where sugars are restricted and foods with added sugar are banned, and then mixed that with lots of outdoor activities (the celebrities are also expected to work on the farm).

Most people would lose weight following such a regime, because it’s likely that calories in are going to be lower than calories out. It’s a simple calorie deficit. 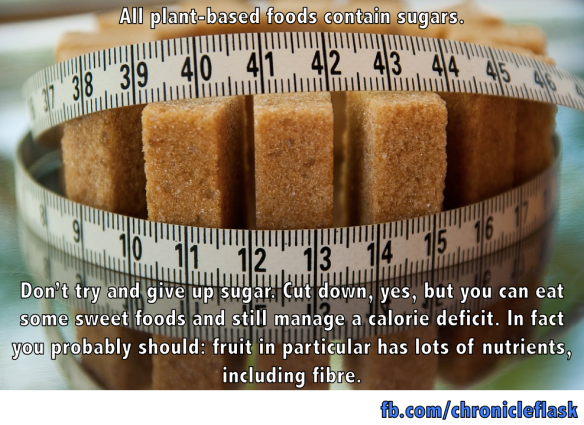 What bothers me is that the show might go on to conclude that we should all “give up” sugar to lose weight – and some people might misinterpret that and end up embarking on an unbalanced, unhealthy and ultimately unsustainable diet – when in fact the results are simply due to calorie deficit.

There’s no need to try to give up sugar. Cut down, yes, but you can eat some sweet foods and still manage a calorie deficit. In fact you probably should: fruit in particular has lots of nutrients, including fibre. Besides, such a diet will probably be a lot more sustainable in the long term.

Unfortunately, “Eat Fewer Calories And Do Some Exercise Farm” doesn’t have quite the same ring, does it?

Well, the first episode aired last night. No, the diet is not “zero sugar”. It’s very low in sugar, yes, but there are sugars. They used milk (contains lactose), ate wholemeal bread, brown rice and oats (all of which are broken down into glucose) and ate a variety of vegetables which, as I mentioned above, all contain small amounts of sugar. In fact, on their very first morning they eat a strange granola mixture made with sweet potato. The USDA food database tells me that sweet potato contains about 0.4 g of fructose, 0.5 g of glucose, 3.3 g of maltose AND 1.4 g of sucrose per 100 g. Yep. Sucrose. The stuff in “refined” sugar.

There was much talk of “detox” and “detoxing” from sugar. Sigh. That’s not a thing. Most worryingly of all, poor Peter Davison (he was “my” Doctor, you know) was carted off in an ambulance on the second day, suffering with dizzy spells. Everyone immediately started talking about how dreadful it was that “sugar” had caused this. There was only one, in passing, comment shown suggesting that perhaps the 65-year-old might have something else wrong with him. In fact, it turned out that he had labyrinthitis, an inner-ear condition. It’s usually viral. It’s not caused by “sugar withdrawal”. I’m sure they’ll make that clear in the next episode, right?

Speaking of which, the celebrities are on Sugar Free Farm for 15 days. A safe rate of weight loss is generally considered to be 0.5-1 kg (or 1-2 lb) a week. So they should lose about 2 kg, or 4 lb, on the outside. A snippet was shown at the end of the program in which Alison Hammond said she was “pleased” she’d lost 8 lbs. Whether that was after two weeks or a shorter period of time wasn’t clear, but either way, it’s a lot. It suggests that her diet is/was too low in calories, particularly considering all the extra physical activity.  Perhaps some of her so-called “sugar withdrawal” symptoms were actually simply due to the fact that she wasn’t consuming enough to keep up with her energy needs?

That aside, the diet they followed did seem to be fairly balanced, with plenty of vegetables and adequate healthy fats and protein. They had all been eating huge quantities of sugary foods beforehand, and cutting down is no bad thing. I’m just skeptical about exactly how much of the bad, and indeed the good, can be pinned on sugar.

Still, it made good telly I suppose.