The popularity of the soya latte seems to be on the rise.

A little while ago botanist James Wong tweeted about the myriad types of plant ‘milk’ that are increasingly being offered in coffee shops, none of which are truly milk (in the biological sense).

This generated a huge response, probably rather larger than he was expecting from an off-hand tweet. Now, I’m not going to get into the ethics of milk production because it’s beyond the scope of this blog (and let’s keep it out of the comments? — kthxbye) but I do want to consider one fairly long thread of responses which ran the gamut from ‘humans are the only species to drink the milk of another animal’ (actually, no) to ‘there’s no benefit to dairy’ (bear with me) and ending with, in essence, ‘dairy is slowly killing us‘ (complicated, but essentially there’s very little evidence of any harm). 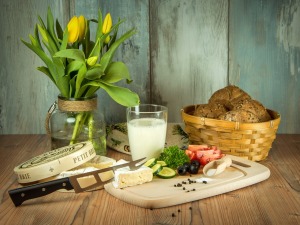 Humans have been consuming dairy products for thousands of years.

But wait. If dairy is so terrible for humans, and if there are no advantages to it, why do we consume it at all? Dairy is not a new thing. Humans have been consuming foods made from one type of animal milk or another for 10,000 years, give or take. That’s really quite a long time. More to the point (I don’t want to be accused of appealing to antiquity, after all), keeping animals and milking them is quite resource intensive. You have to feed them, look after them and ensure they don’t wander off or get eaten by predators, not to mention actually milk them on a daily basis. All that takes time, energy and probably currency of some sort. Why would anyone bother, if dairy were truly detrimental to our well-being?

In fact, some cultures don’t bother. The ability to digest lactose (the main sugar in milk) beyond infancy is quite low in some parts of the world, specifically Asia and most of Africa. In those areas dairy is, or at least has been historically, not a significant part of people’s diet.

Which is interesting because it suggests, if you weren’t suspicious already, that there IS some advantage to consuming dairy. The ability to digest lactose seems to be a genetic trait. And it seems it’s something to do, really quite specifically, with your geographic location.

Which brings us to vitamin D. This vitamin, which is more accurately described as a hormone, is a crucial nutrient for humans. It increases absorption of calcium, magnesium and phosphate, which are all necessary for healthy bones (not to mention lots of other processes in the body). It’s well-known that a lack of vitamin D leads to weakened bones, and specifically causes rickets in children. More recently we’ve come to understand that vitamin D also supports our immune system; deficiency has been meaningfully linked to increased risk of certain viral infections.

What’s the connection between vitamin D and geographic location? Well, humans can make vitamin D in their skin, but we need a bit of help. In particular, and this is where the chemistry comes in, we need ultraviolet light. Specifically, UVB – light with wavelengths between 280 nm to 315 nm. When our skin is exposed to UVB, a substance called 7-dehydrocholesterol (7-DHC to its friends) is converted into previtamin D3, which is then changed by our body heat to vitamin D3, or cholecalciferol – which is the really good stuff. (There’s another form, vitamin D2, but this is slightly less biologically active.) At this point the liver and kidneys take over and activate the chloecalciferol via the magic of enzymes.

We make vitamin D in our skin when we’re exposed to UVB light.

How much UVB you’re exposed to depends on where you live. If you live anywhere near the equator, no problem. You get UVB all year round. Possibly too much, in fact – it’s also linked with skin cancers. But if you live in northerly latitudes (or very southerly), you might have a problem. In the summer months, a few minutes in the sun without sunscreen (literally a few minutes, not hours!) will produce more than enough vitamin D. But people living in UK, for example, get no UVB exposure for 6 months of the year. Icelanders go without for 7, and inhabitants of Tromsø, in Norway, have to get by for a full 8 months. Since we can only store vitamin D in our bodies for something like 2-4 months (I’ve struggled to find a consistent number for this, but everyone seems to agree it’s in this ballpark), that potentially means several months with no vitamin D at all, which could lead to deficiency.

In the winter northern Europeans don’t receive enough UVB light from the sun to produce vitamin D in their skin.

In the winter, northern Europeans simply can’t make vitamin D3 in their skin (and for anyone thinking about sunbeds, that’s a bad idea for several reasons). In 2018, this is easily fixed – you just take a supplement. For example, Public Health England recommends that Brits take a daily dose of 10 mcg (400 IU) of vitamin D in autumn and winter, i.e. between about October and March. It’s worth pointing out at this point that a lot of supplements you can buy contain much more than this, and more isn’t necessarily better. Vitamin D is fat-soluble and so it will build up in the body, potentially reaching toxic levels if you really overdo things. Check your labels.

Oily fish is an excellent source of vitamin D.

But what about a few thousand years ago, before you just could pop to the supermarket and buy a bottle of small tablets? What did northern Europeans do then? The answer is simple: they had to get vitamin D from their food. Even if it’s not particularly well-absorbed, it’s better than nothing.

Of couse it helps if you have access to lots of foods which are sources of vitamin D. Which would be…  fatty fish (tuna, mackerel, salmon, etc) – suddenly that northern European love of herring makes so much more sense – red meat, certain types of liver, egg yolks and, yep, dairy products. Dairy products, in truth, contain relatively low levels of vitamin D (cheese and butter are better than plain milk), but every little helps. Plus, they’re also a good source of calcium, which works alongside vitamin D and is, of course, really important for good bone health.

A side note for vegans and vegetarians: most dietry sources of vitamin D come from animals. Certain mushrooms grown under UV can be a good source of vitamin D2, but unless you’re super-careful a plant-based diet won’t provide enough of this nutrient. So if you live in the north somewhere or you don’t, or can’t, expose your skin to the sun very often, you need a supplement (vegan supplements are available).

One thing I haven’t mentioned of course is skin-colour. Northern Europeans are generally fair-skinned, and this is vitamin D-related, too. The paler your skin, the better UVB penetrates it. Fair-skinned people living in the north had an advantage over those with darker skin in the winter, spring and autumn months: they could produce more vitamin D. In fact, this was probably a significant factor in the evolution of fair skin (although, as Ed Yong explains in this excellent article, that’s complicated).

In summary, consuming dairy does have advantages, at least historically. There’s a good reason Europeans love their cheeses. But these days, if you want to eat a vegan or vegetarian diet for any reason (once again, let’s not get into those reasons in comments, kay?) you really should take a vitamin D supplement. In fact, Public Health England recommends that everyone in the UK take a vitamin D supplement in the autumn and winter, but only a small amount – check your dose.

By the way, if you spot any ‘diary’s let me know. I really had to battle to keep them from sneaking in…

If you enjoy reading my blog, please consider buying me a coffee through Ko-fi using the button below. Black, though – I like dairy, just not in my coffee!