It’s nearly the end of the school year here in the U.K., traditionally a time for reflecting on what’s gone before and planning ahead for the shiny, new September coming in a mere nine weeks (sorry, teachers!). With that in mind, let’s talk about something that comes up early in most chemistry syllabuses, and which bothers me a little more each time I think about it.

Examples of chemical changes include things like burning a match, cooking an egg, or the reaction between vinegar and baking soda. Physical changes are largely changes of state, such as melting and boiling, but also include changes such as dissolving salt in water, or grinding limestone chips to powder.

So far, so good. Except… then we start to put descriptors on these things. And that’s when the trouble starts.

The first problem comes with the idea that “chemical changes are irreversible.” This is often taught in early secondary science as a straight-up fact, and is so pervasive that it’s even appeared in multiple choice exam questions, like the one shown here. The student, for the record, was expected to choose option C, “the change is irreversible.”

Except. Argh. I can tell you exactly why the student has opted for D, “the change is reversible,” and it’s not because they haven’t done their revision. Quite the opposite, in fact. No, it’s because this student has learned about weak acids. And in learning about acids, this student met this symbol, ⇌, which literally indicates a reversible chemical reaction.

Yes, that’s right. Not too long after teaching students that chemical reactions are not reversible, we then explicitly teach them that they are. Indeed, this idea of chemical reversibility is such a common one, such an important concept in chemistry, that we even have a symbol for it.

Now, of course, I can explain this. When we say chemical reactions are irreversible, what we mean is “generally irreversible if they’re carried out in an open system.” In other words, when the wood in that match burns out in the open, the carbon dioxide and water vapour that form will escape to the atmosphere, never to return, and it’s impossible to recover the match to its original state.

The problem is that many chemical reactions occur in closed systems, not least a lot of reactions that happen in solution. Hence, the whole acids thing, where we talk about weak acids “partially dissociating” into ions.

Then there’s that entire topic on the Haber process…

Can I be the only one to think that this is rather a lot of nuance to expect teenagers to keep in their head? It’s nothing short of confusing. Should we really be saying one thing in one part of a course, and the literal opposite in another? To be clear, this isn’t even a GCSE vs. A level thing – these ideas appear in the same syllabus.

Melting is a change of state, in this case from (solid) ice to (liquid) water.

All right, okay, let’s move along to the idea that physical changes are reversible. That’s much more straightforward, isn’t it? If I melt some ice, I can re-freeze it again? If I boil some water, I can condense it back into the same volume of liquid… well… I can if I collect all vapour. If I do it in a closed system. The opposite of the condition we imposed on the chemical reactions. Er. Anyway…

We might just about get away with this, if it weren’t for the grinding bit. If physical changes are truly readily reversible, then we ought to be able to take that powder we made from the limestone lumps and make it back into a nice single piece again, right? Right?

See, this is the problem. What this is really all about is entropy, but that’s a fairly tricky concept and one that’s not coming up until A level chemistry.

Okay. Instead of talking about reversible and irreversible, let’s talk about bond-breaking and bond-forming. That’s fine, isn’t it? In chemical changes, bonds are broken and formed (yep) and in physical changes, they aren’t.

Let’s go back to water for a moment. Water has the formula H2O. It’s made up of molecules where one oxygen atom is chemically bonded to two hydrogen atoms. When we boil water, we don’t break any of those bonds. We don’t form hydrogen and oxygen gas when we boil water; making a hot cup of tea would be a lot more exciting if we did. So we can safely say that boiling water doesn’t involve breaking any bonds, right? We-ell…

Water molecules contain covalent bonds, but the molecules are also joined by (much weaker) hydrogen bonds.

The trouble is that water contains something called hydrogen bonds. We usually do a bit of a fudge here and describe these as “intermolecular forces,” that is, forces of attraction between molecules. This isn’t inaccurate. But the clue is in the name: hydrogen bonds are quite, well, bond-y.

But we’re probably on safe ground if we talk about the formation of new substances. Aren’t we?

What about dissolving? If I dissolve hydrogen chloride gas, HCl, in water, that’s a physical change, right? I haven’t made anything new? Or… have I? I had molecules with a covalent bond between the hydrogen and the chlorine, and now I have… er… hydrochloric acid (note, that’s a completely different link to the one I used back there), made up of H+ and Cl- ions mingled with water molecules.

So… it’s…. a chemical change? But wait. We could (I don’t recommend it) evaporate all that water away, and we’d have gaseous HCl again. It’s reversible. 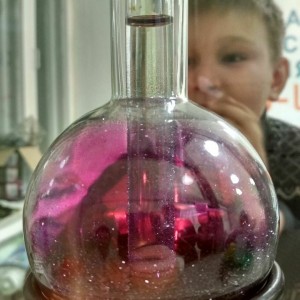 Solid iodine is silvery-grey, but iodine vapour is a brilliant violet colour.

Hm. What about the signs that a chemical change is occurring? Surely we’re all right there? Fizzing: that’s a sign of a chemical change. Except… are you sure you know the difference between boiling and fizzing? It’s basically all bubbles, after all. Vapour? But, steam is a vapour, isn’t it? Although, on the other hand, water is a product of several chemical reactions. Colour changes? Check out what happens when you heat a small amount of solid, silvery-grey iodine so that it sublimes (spoiler: there’s a colour change).

Is anyone else really confused by now?

You should be. Your students almost certainly are.

There are, in short, more exceptions to every single one of these rules that there are for that “i before e” thing you learned in English (a rule, incidently, which is particularly galling for scientists who constantly have to deal with weights and heights).

Where do we go from here? I think it’s probably time we asked ourselves why we’re even teaching this concept in the first place. Really, it’s there to get students to think about the difference between changes of state and chemical reactions.

I suspect we need to worry about this rather less than we are: most children are very good at identifying changes of state. They do it instinctively. They only start getting confused about it when we teach them a lot of rules which they then try to apply. I’m pretty sure that’s not the way teaching is supposed to work. 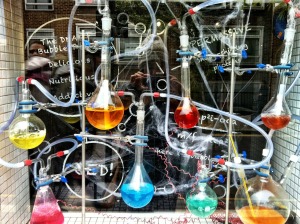 This could definitely be simpler.

I say we change the way we talk about changes: chemistry has a reputation for being tricky, and this sort of confusing, contradictory thing is part of the reason why.