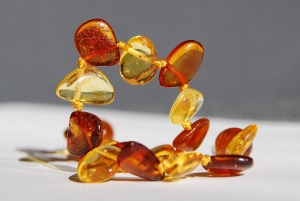 Do amber beads have medicinal properties?

Amber, as anyone that was paying attention during Jurassic Park will tell you, is fossilised resin from trees that lived at least twenty million years ago (although some scientists have speculated it could be older). It takes the form of clear yellow through to dark brown stones, seemingly warm to the touch, smooth and surprisingly hard. It is certainly beautiful. But does it also have medicinal properties? And if it does, are they risk-free?

In 2016 a one year-old boy was found dead at his daycare centre in Florida. The cause of death was a necklace, which had become tangled and tightened to the point that he was unable to breathe.

Why was he wearing a necklace? Surely everyone knows that babies shouldn’t wear jewellery around their necks where it could so easily cause a terrible tragedy like this? No one needs a necklace, after all – it’s purely a decorative thing. Isn’t it?

Yes. Yes, it is. However, this particular type of jewellery was specifically sold for use by babies. Sold as a product that parents should give their children to wear, despite all the advice from medical professionals. Why? Because this jewellery was made from amber, and that’s supposed to help with teething pains.

Teething is a literal pain.

Anyone whose ever had children will tell you that teeth are basically a non-stop, literal pain from about 4 months onward. Even once your child appears to have a full set, you’re not done. The first lot start falling out somewhere around age five, resulting in teeth that can be wobbly for weeks. And then there are larger molars that come through at the back somewhere around age seven. Teenagers often find themselves suffering through braces and, even when all that’s done, there’s the joy of wisdom teeth still to come.

It’s particularly difficult with babies, who can’t tell you what hurts and who probably have inconsistent sleep habits at the best of times. Twenty sharp teeth poking through swollen gums at different times has to be unpleasant. Who could blame any parent for trying, well, pretty much anything to soothe the discomfort?

Enter amber teething necklaces. They’re sold as a “natural” way to soothe teething pain. They look nice, too, which I’m sure is part of their appeal. A chewed plastic teething ring isn’t the sort of thing to keep in baby’s keepsake box, but a pretty necklace, well, I’m sure many parents have imagined getting that out, running their fingers over the beads and having a sentimental moment years in the future.

So-called amber teething necklaces are made from “Baltic amber,” that is, amber from the Baltic region: the largest known deposit of amber. It is found in other geographical locations, but it seems that the conditions – and tree species – were just right in the Baltic region to produce large deposits.

Chemically, it’s also known as succinite, and its structure is complicated. It’s what chemists would call a supramolecule: a complex of two or more (often large) molecules that aren’t covalently bonded. There are cross-links within its structure, which make it much denser than you might imagine something that started as tree resin to be. Baltic amber, in particular, also contains something else: between 3-8% succinic acid.

Succinic acid is a dicarboxylic acid.

Succinic acid is a much simpler molecule with the IUPAC name of butanedioic acid. It contains two carboxylic acid groups, a group of atoms we’re all familiar with whether we realise it or not – because we’ve all met vinegar, which contains the carboxylic acid also known as ethanoic acid. If you imagine chopping succinic acid right down the middle (and adding a few extra hydrogen atoms), you’d end up with two ethanoic acid molecules.

Succinic acid (the name comes from the Latin, succinum, meaning amber) is produced naturally in the body where it is (or, rather, succinate ions are) an important intermediate in lots of chemical reactions. Exposure-wise it’s generally considered pretty safe at low levels and it’s a permitted food additive, used as an acidity regulator. In European countries, you might see it on labels listed as E363. It also turns up in a number of pharmaceutical products, where it’s used as an excipient – something that helps to stabilise or enhance the action of the main active ingredient. Often, again, it’s there to regulate acidity.

Basically, it’s mostly harmless. And therefore, an ideal candidate for the alternative medicine crowd, who make a number of claims about its properties. I found one site claiming that it could “improve cellular respiration” which… well, if you’ve got problem with cellular respiration, you’re less in need of succinic acid and more in need of a coffin. Supposedly it also relives stress and prevents colds, because doesn’t everything? And, of course, it allegedly relieves teething pains in babies, either thanks to its general soothing effect or because it’s supposed to reduce inflammation, or both.

Purporters claim succinic acid is absorbed through the skin.

The reasoning is usually presented like this: succinic acid is released from the amber when the baby wears the necklace or bracelet and is absorbed through the baby’s skin into their body, where it works its magical, soothing effects.

Now. Hold on, one minute. Whether this is true or not – and getting substances to absorb through skin is far less simple than many people imagine, after all, skin evolved as a barrier – do you really, really, want your baby’s skin exposed to a random quantity of an acidic compound? Succinic acid may be pretty harmless but, as always, the dose makes the poison. Concentrated exposure causes skin and eye irritation. Okay, you might say, it’s unlikely that an amber necklace is going to produce anywhere near the quantities to cause that sort of effect, but if that’s your logic, then how can it also produce enough to pass through skin and have any sort of biological effect on the body?

The answer, perhaps predictably, is that it doesn’t. In a paper published in 2019, a group of scientists actually went to the trouble of powdering Baltic amber beads and dissolving the powder in sulfuric acid to measure how much succinic acid they actually contained. They then compared those results with what happened when undamaged beads from the same batches were submerged in solvents, with the aim of working out how much succinic acid beads might conceivably release into human skin. The answer? They couldn’t measure any. No succinic acid was released into the solvents, at all. None. 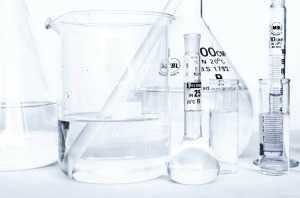 Scientists submerged Baltic amber beads in solvents to see how much succinic acid they released.

So amber necklaces don’t work to relieve teething pains. They can’t. Of course, there could be a sort of placebo effect – teething pain is very much one of those comes-and-goes things. It’s very easy to make connections that just aren’t there in this kind of situation, and imagine that the baby is more settled because of the necklace, when in fact they might have calmed down over the next few hours anyway. Or maybe they’re just distracted by the pretty beads.

And, fine. If wearing the jewellery was really risk-free, then why not? But as the story at the start of this post proves, it is not. Any kind of string around a baby’s neck can become twisted, interfering with their breathing. Most necklaces claim to have some sort of “emergency release” mechanism so that they come apart when pulled, but this doesn’t always work.

Don’t fall for the marketing.

Ah, goes the argument. But it’s okay, because we only sell bracelets and anklets for babies. They don’t go around the baby’s neck. It’s completely safe!

No. Because I don’t care how carefully you make it: the string or cord could still break (especially if it’s been chewed), leaving loose beads to pose a serious choking hazard. Not to mention get jammed in ears or nostrils. Even if you’re with the baby, watching them, these sorts of accidents can happen frighteningly quickly. Letting a baby sleep with such an item is nothing short of asking for disaster, and no matter how good anyone’s intentions, babies do have a habit of dozing off at odd times. Will you really wake the child up to take off their bracelet? Every time?

In summary, don’t fall for the marketing. Amber necklaces may be pretty, but they’re not suitable for babies. The claims about succinic acid are completely baseless, and the risks are very real.