The chemical structure of dexamethasone (image from Wikimedia Commons)

It’s been widely reported today that a “cheap and widely-available” steroid treatment has been shown to be effective in patients suffering the most severe COVID-19 symptoms, significantly reducing the risk of death for both patients on ventilators and those on oxygen treatment.

Most of the reports have understandably focused on the medical aspects, but this is a chemistry blog (mostly) so *cracks chemistry knuckles* what is dexamethasone, exactly?

Its story starts a little over 60 years ago when, in 1958, a paper was published on “clinical observations with 16a-methyl corticosteroid compounds”. Bear with me, I shall explain. Firstly, corticosteroids are hormones which are naturally produced in our bodies. They do all sorts of nifty, useful things like regulate our immune response, reduce inflammation and help us to get energy from carbohydrates. Two of the most familiar names are probably cortisol and cortisone—both of which are released in response to stress.

The discovery of corticosteroids was an important one. So important, in fact, that a few years earlier, in 1950, Tadeusz Reichstein, Edward Calvin Kendall and Philip Showalter Hench had been awarded a Nobel Prize in Physiology and Medicine for “discoveries relating to the hormones of the adrenal cortex”.

The adrenal glands are two small glands found above the kidneys. The outermost part of these glands is called the adrenal cortex (“cortex” from the Latin for (tree) bark and meaning, literally, an outer layer). In the mid-1930s Kendall and Reichstein managed to isolate several hormones produced by these glands. They then made preparations which, with input from Hench, were used in the 1940s to treat a number of conditions, including rheumatoid arthritis.

This was hugely significant at the time, because until this point the treatments for this painful, debilitating condition were pretty limited. Aspirin was known, of course, but wasn’t particularly effective and long-term use had potentially dangerous side effects. Injectable gold compounds (literally chemical compounds containing Au atoms/ions) had also been tried, but those treatments were slow to work, if they worked at all, and were expensive. The anti-malarial drug, hydroxychloroquine (which has also been in the news quite a lot), had been tried as a “remittive agent”—meaning it could occasionally produce remission—but it wasn’t guaranteed.

Corticosteroids were a game-changer. When Hench and Kendall treated patients with what they called, at the time, “compound E” (cortisone) there was a rapid reduction in joint inflammation. It still caused side effects, and it didn’t prevent joint damage, but it did consistently provide relief from painful symptoms.

Fast-forward to the 1958 paper I mentioned earlier, and scientists had discovered that a little bit of fiddling with the molecular structure of steroid molecules caused them to have different effects in the body. The particular chemical path we’re following here started with prednisolone, which had turned out to be a useful treatment for a number of inflammatory conditions. However, placing a methyl group (—CH3) on the 16th carbon—which is, if you have a look at the diagram below, the one on the pentagon-shaped ring, roughly in the middle—changed things.

The steroid “nucleus”: each number represents a carbon atom (image from Wikimedia Commons)

In 1957, four different molecules with methyl groups on that 16th carbon were made available for clinical trial. One of them was 16a-methyl 9a-fluoroprednisolone, more handily known as dexamethasone.

(Quick aside to explain that on the diagram of dexamethasone at the start of this post, the methyl group on the 16th carbon is represented by a dashed wedge-shape. It’s a 2D diagram of a 3D molecule, and the dashed wedge tells us that the methyl group is pointing away from us, through the paper, or rather, screen. This matters because molecules like this have mirror image forms which usually have very different effects in the body—so it’s important to get the right one.)

Dexamethasone is on the WHO Model List of Essential Medicines

It turned out that dexamethasone had a much stronger anti-inflammatory action than plain prednisolone, and it was also more effective the other molecules being tested. It caused a bigger reduction in symptoms, at lower doses. A win all round. It did still have side effects—weight gain, skin problems and digestive issues—but these were no worse than other steroids, and better than some. In fact, salt and water retention were less with dexamethasone, which meant less bloating. It also seemed to have less of an effect on carbohydrate metabolism, making it potentially safer for patients with diabetes.

Skipping forward to 2020, and dexamethasone is routinely used to treat rheumatoid arthritis, as well as skin diseases, asthma, COPD and various other conditions. It is on the WHO Model List of Essential Medicines—a list of drugs thought to be the most important for taking care of the health needs of the population, based on their effectiveness, safety and relative cost.

In the wake of more and more evidence that COVID-19 disease was leading to autoimmune and autoinflammatory diseases, scientists have been looking at anti-inflammatory drugs to see if any of them might help. The Recovery Trial at the University of Oxford was set up to investigate a few different drugs, including hydroxychloroquine (there it is again) and dexamethasone. 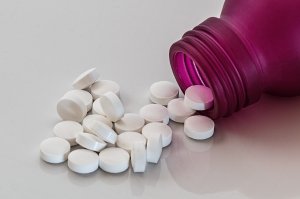 It’s not a miracle cure but, in the most severe cases, dexamethasone—a cheap, 60+ year old drug—might just make all the difference.

And that brings us back to today’s news: in the trial, 2104 patients were given dexamethasone once per day for ten days and compared to 4321 patients who were given standard care. The study, led by Professor Peter Horby and Professor Martin Landray, showed that dexamethasone reduced the risk of dying by one-third in ventilated patients and by one fifth in other patients receiving only oxygen.

It’s not a miracle cure by any means: it doesn’t help patients who don’t (yet) need respiratory support, and it doesn’t work for everyone, but, if you find yourself on a ventilator, there’s a chance this 60+ year-old molecule that was first developed to cure rheumatoid arthritis might, just, save your life. And that’s pretty good news.

EDIT 17th June 2020: Chemistry World published an article pointing out that “the trial results have yet to be released leading some to urge caution when interpreting them” and quoting Ayfer Ali, a specialist in drug repurposing, as saying “we have to wait for the full results to be peer reviewed and remember that it is not a cure for all, just one more tool.

If you’re studying from home, have you got your Pocket Chemist yet? Why not grab one? It’s a hugely useful tool, and by buying one you’ll be supporting this site – it’s win-win!

Like the Chronicle Flask’s Facebook page for regular updates, or follow @chronicleflask on Twitter. Content is © Kat Day 2020. You may share or link to anything here, but you must reference this site if you do. If you enjoy reading my blog, and especially if you’re using information you’ve found here to write a piece for which you will be paid, please consider buying me a coffee through Ko-fi using the button below.

Want something non-sciency to distract you from, well, everything? Why not check out my fiction blog: the fiction phial.