It’s an innocent enough looking molecule, with a relatively simple molecular formula of C10H14N2.  Just a handful of three of the most common elements, arranged in a couple of rings. How dangerous can it be?

Pretty dangerous, as it turns out.  And yet unlike some other hazardous substances, people deliberately expose themselves to this one on a daily basis.

So what’s its story?

We could go all the way back to the evolution of the tobacco plant, nicotiana tabacum, or to the first native Americans to discover that its smoke had some interesting effects, but I’m not sure I can pin a date to those so, instead, let’s start with the famous Christopher Columbus, who was famously introduced to a plant whose smoke was called tobacco by the natives of Hispaniola in 1492 on his first voyage.  It was a few years later, in 1559, that tobacco was introduced to Europe.  Elizabeth I held the English throne and Henry II was the King of France (just – he died in 1559), but it was a relatively minor official who gave his name to the newly-discovered plant: Jean Nicot de Villemain, the French ambassador in Portugal, who obtained the seeds and leaves from Luis de Gois, a Portuguese colonist in São Paulo.

Nicot bought the tobacco seeds and leaves to the French court and described them as a new wonder drug.  Tobacco was touted as a miracle cure for everything from sexually transmitted diseases to flatulence, and went on to be used as snuff and, of course, smoked.  In England and France, tobacco was seen as an elitist privilege and the story goes that Sir Walter Raleigh, arguably in the first ever case of peer pressure, even convinced Queen Elizabeth I to try smoking. 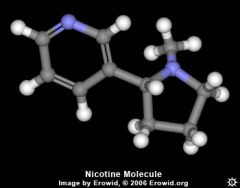 Of course at first it wasn’t understood exactly what the substance was in the plant that had interesting effects on the body.  Pure nicotine wasn’t isolated from the tobacco plant until 1828, by physician Wilhelm Heinrich Posselt and chemist Karl Ludwig Reimann of Germany, and they recognised it as a poison.

So why does the tobacco plant produce a poisonous chemical?  Quite simply the plant evolved it as a powerful defence mechanism.  It’s deadly to insects and critters chewing on tobacco leaves soon bit the dust.  Very helpful to plant which, being stuck in the ground, can’t run away or swat them.  Which leads us to another use for nicotine: as an insecticide.  After World War II thousands of tons of nicotine insecticide, made from waste from the tobacco industry, were being used worldwide.

Use has since declined but it’s still used, not least because, originating from a botanical source, it’s considered ‘organic’.  This is rather scary given just how toxic nicotine is.  60 milligrams (0.06 grams) is enough to kill a non-smoker (smokers generally have some tolerance).  This is a tiny amount.  To try and put it in some kind of context, those ibuprofen painkillers in your medicine cabinet (probably, unless you’ve picked up some heavy duty ones from somewhere) have 200 mg of active ingredient in each pill.  That’s not the weight of the whole tablet you understand – it’s mostly starch and a few other inactive bits and pieces – just the stuff that actually kills the pain.  But the point is, if you made a nicotine tablet in the same way as an ibuprofen tablet one third of it would be enough to kill you deader than the proverbial doornail. (EDIT: the lethal dose above is probably an underestimate. A recent review suggested it would take at least 0.5 grams to kill an adult – about the dose of the average paracetamol tablet.)

Alternatively consider this: one single drop of pure nicotine liquid, applied to the skin, would be just about enough to kill you (if you didn’t seek treatment, that is).

That’s more poisonous than both arsenic and strychnine, and on a par with cyanide.  It’s far more toxic than organophosphate pesticides.  Ah organic fruit and veg, so good for you, and safe, and… er… produced with the help of one of the most deadly poisons known to man.

(I should, to be fair, point out that nicotine as a pesticide hasn’t been available to amateur gardeners for some time, and it’s professional use is being, or has already been, fazed out in most countries over the last five years. It’s largely replaced with a group of related chemicals called neonicotinoids which are safer for humans, if not for bees. And actually, because of the bee problem, it looks as though their days are numbered now, too.  Who’d have thought that neurotoxins would turn out to be so problematic eh?)

Why is nicotine so dangerous?  First of all it’s absorbed through the skin, which makes exposure frighteningly easy – no need to waste time with pesky things like breathing it in or swallowing it.  Once in the body it acts as a nerve agent, and a speedy one: moving through the bloodstream to the brain in about 7 seconds.  The nervous system is really quite an important thing, and nicotine messes with it big stylee.  It binds to receptors in the brain and increases the levels of several neurotransmitters.  At very low levels, like those from a single cigarette, the increased levels of dopamine cause feelings of relaxation and euphoria, which is one reason smokers like their cigarettes so much.

It also likes to stick to acetylcholine receptors, and at toxic levels can cause muscle contractions (including irregular heartbeat) and respiratory paralysis (that’s exactly as bad as it sounds).  Confusingly, it can act as both a stimulant and a relaxant at the same time, thanks the really quite astonishingly long list of chemical messengers it causes the brain to release into the body.  Ultimately, in both mammals and insects, it kills by paralysis – screwing up the nervous system so much that everything simply shuts down.

It’s important to remember at this point that nicotine is not the same as cigarettes, which are full of umpty-seven (a technical unit) of harmful substances, of which nicotine is but one.  In particular nicotine, unlike cigarettes themselves, isn’t technically carcinogenic.  It’s just a deadly nerve poison.

Has anyone ever died from nicotine poisoning alone?  Yes, definitely.  In fact there’s one particular story that is also interesting for laying early foundations in forensic science.  In Belgium in 1850 a pair of socialites, the Comte and Countess de Bocarmé, had become fond of living beyond their means.  They were counting on a large inheritance when the Countess’ father died, but to their annoyance he left most of his money to his son, Gustave Fougnies who, some might say foolishly, made his own will leaving most of the the fortune to his sister.  The Comte and Countess invited him to dinner and doused him with pure nicotine which the Comte, who fancied himself as a chemist, had distilled himself.

They covered up the murder and believed they would get away with it because they were well aware that at that time there was no way to identify an alkaloid such as nicotine in a dead body.

The magistrate, however, was determined to get to the bottom of the crime and so took the problem to the Belgian chemist Jean Servais Stas.  He patiently started work with organ tissues from  Fougnies’ body and, after three months, worked out a method using ether, ethanoic (acetic) acid and ethanol that allowed him to extract the nicotine from the tissue.  The Comte de Bocarmé got his well-earned comeuppance and this technique, called the Stas-Otto method, is still used in toxicology today.  (Check out this great article by Deborah Blum for more detail on this fascinating story.)

There have of course been many, many other cases of accidental nicotine poisoning, especially in children (one chewed and swallowed cigarette is enough to make a toddler severely ill) but fortunately the prognosis is good with prompt medical treatment so deaths are relatively unusual, although there have been one or two deliberate suicides.

Obviously we could argue that nicotine kills hundreds of thousands of people every year.  As any smoker will tell you, nicotine addiction is incredibly tough to kick.  About one in six UK adults smoke, and 100,000 die in the UK each year due to smoking.  Again, it’s the umpty-seven (there it is again) other chemicals that do most of the actual damage, but it’s the nicotine addiction keeps people coming back.

Does it have a good side?  Maybe, but the story is far from clear.  Some studies suggest that nicotine exposure actually reduces the risk of certain diseases.  It may have the potential to treat Alzheimer’s disease (although smoking is associated with an increased risk), an illness predicted to affect 1 in 85 people globally by 2050.  It’s also been shown to delay the onset of Parkinson’s disease.  It’s even been explored as an experimental treatment for OCD, but this of course raises questions about the sense of giving an addictive drug associated with a habit-forming behaviour to an obsessive compulsive patient.

So there we are.  Nicotine, one of the first readily-available recreational drugs.  Incredibly addictive.  An insecticide and deadly poison.  There at the birth of forensic chemistry.  And now, maybe, a treatment for common neurodegenerative diseases.  Certainly not one of the chemical good guys, but maybe not all bad either.