When I was a kid I was a bit of a tomboy.  ‘Bit’ being the understatement of the century.  I had short hair, lived in trousers and had a memorable (for me anyway, I’m sure they’ve long forgotten it) argument with my parents about getting a model Castle Grayskull.  I lost the argument, but more because it was a frightful waste of money than for any other reason.  I also remember owning a small mountain of Lego, several Sindy dolls (ok, they were a bit girly), a large collection of Garbage Pail Kids cards, an Etch a Sketch, numerous Rubik’s puzzles, a microscope, an electronics kit, and a chemistry set.

I don’t recall ever being under the impression that any of those last three were ‘for boys’.  Actually I don’t recall categorising many toys as for boys or girls.  Ok, yes, the Sindy dolls were girly, but then boys had Action Man, so that balanced out.  Everything else was fair game, wasn’t it?  I don’t remember the toy section in most shops being split into boys and girls.  I certainly don’t remember any areas that were awash with horrific sickly pink, and I swear the only place I ever heard hide or hair of a princess was in a Grimms’ fairy tale.

It seems to be different now, and I’m at a loss to understand why.  You would think that 30-odd years later, in the 21st century, there would be less gender discrimination, not more.

Perhaps it’s down to the fact that every bit of stock is entered into a database now, and those databases have somehow managed to have ‘girls’ and ‘boys’ fields built into them, and so someone allocates toys to these categories, probably without a great deal of thought.  Shops claim these categories make things ‘easier’ for shoppers, and perhaps it does, at least for online shoppers looking for inspiration for a present and not really knowing where to start.  Boy or girl is one question most people can probably answer.

But if so, it’s rather depressing that the result of modern technology is to perpetuate the idea that science isn’t for girls.  Because this is what seems to have happened.  Recently there have been a number of high profile cases of big-name stores allocating science toys as ‘for boys’.

The first one I came across was Marks and Spencer: a photo doing the rounds on Facebook last Christmas, courtesy of the Let Toys Be Toys (LTBT) campaign, with the witty tagline “this is not just sexism, this is Marks & Spencer sexism” showing all the science toys labelled as “boys’ stuff”.  Marks & Spencer, to their credit, responded quickly and changed their online catalogue.  A quick look now suggests they’ve more or less stuck to this ideal, although they do still have a handful of branded toys labelled as ‘boys stuff’.  We have yet to see what will happen next Christmas.

I had been unaware of it before then, but it turns out that the London toy shop Hamleys had removed their blue “boys” and pink “girls” signs in the face of similar criticism some time previously. 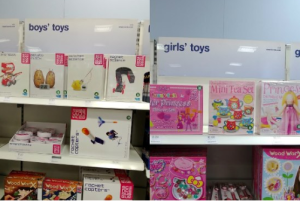 Skip forward a bit, and we come to Boots.  Now this is particularly ironic, since Boots is (in case you hadn’t noticed) a pharmaceutical company.  It was established in 1849 by John Boot, who used to help his mother – yes, a woman – run the family’s herbal medicine shop in Nottingham.  You might think that such a company would be particularly keen to encourage women into the sciences, and especially chemistry.  You know, given that chemistry is a required A-level for studying pharmacy at university.  Say, at Nottingham University, down the road (where, incidentally, I completed my chemistry PhD).  And yet, here we go again, all the science toys were labelled as being for boys while girls were doomed to pink princess tea sets.  Ooops.  There was activity on Twitter.  The BBC television show Watchdog picked up the story.   Customers started complaining.  Boots issued a statement saying that they were terribly sorry that their efforts to ‘help’ shoppers (see what I mean?) had gone astray, and that they were removing the signage immediately. 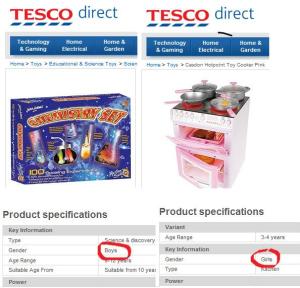 Suddenly the whole thing was picking up some serious momentum.  You might think that the bigger stores at least would have taken a hasty look at their shelves and made some quick changes.  Perhaps some did, but Tesco’s were a bit slow to catch on.  Sarah Marr wrote a great open letter to Tesco on her blog, in which she pointed out that she had frivolously wasted time in gaining a PhD in theoretical physics when she should perhaps, if Tesco had their way, have spent a bit more time in the kitchen.

Initially Tesco were pretty unrepentant, claiming that toy signage reflected the way customers liked to shop (there we go again – I really would like to see the consumer research that all these retailers seem to be referring to).  Then Watchdog picked it up, following on from last week’s Boots story, and suddenly they backed down completely and said it had all been a mistake.  Funny how being broadcast to a few million viewers on BBC at 8pm can make a company change their minds isn’t it?

Personally I find this one particularly galling, since I am a chemist myself, and definitely lacking a Y chromosome.  The idea that chemistry is only for boys is ridiculous.  And anyway, there’s a lot of chemistry in cooking.  Just ask Heston Blumenthal.

In fact, I wonder if he had a toy cookery set when he was a kid?  Someone should ask him.  Perhaps he could be persuaded to launch a ‘chemistry of cooking’ set, that would really confuse everyone wouldn’t it?

Girls should, of course, be free to play with whatever toy they like, from cupcake set to chemistry set.  Boys ought be able to choose a toy drill or a toy doll, or both.  There is no need to label these things as ‘for boys’ or ‘for girls’, let children, and their parents, choose whichever toy they want.

The real problem with these signs is that they subtly send the message that children shouldn’t be playing with certain toys, and that’s just wrong.  The result of this effort to make things ‘easier’ for shoppers may actually be that they end up never looking at the science toys when they’re buying presents for their daughter, granddaughter or niece.  Or they might, but then worry that a present won’t be well-received because it’s a ‘boys’ toy.

Girls might simply never see those toys – after all why would they look at something that’s apparently not for them – and never develop any curiosity.  And we all know how susceptible children can be to peer pressure.  A girl playing with a ‘boys’ toy might be teased by her friends.  What if that insidious little idea sticks?  When she’s choosing her A-levels some years later, might she think “chemistry’s for boys” and not choose it, despite being more than able?  How many potential scientists might we lose out on as a result?  And make no mistake, we need good chemists.  They will be at the forefront of sorting out the world’s environmental problems, coming up with new fuel strategies, designing new material solutions and working in medicine and pharmaceuticals.

Besides which, chemistry generally has much better career prospects than princess-try.

FInd out more about the Let Toys be Toys campaign here.