Happy New Year, everyone! Usually, I write this post in December but somehow things have got away from me this year, and I find myself in January. Oops. It’s still early enough in the month to get away with a 2019 round-up, isn’t it? I’m sure it is.

It was a fun year, actually. I wrote several posts with International Year of the Periodic table themes, managed to highlight the tragically-overlooked Elizabeth Fulhame, squeezed in something light-hearted about the U.K.’s weird use of metric and imperial units and discovered the recipe for synthetic poo. Enjoy!

Newland’s early table of the elements

January started with a reminder that 2019 had been officially declared The Year of the Periodic Table, marking 150 years since Dmitri Mendeleev discovered the “Periodic System”. The post included a quick summary of his work, and of course mentioned the last four elements to be officially named: nihonium (113), moscovium (115), tennessine (117) and oganesson (118). Yes, despite what oh-so-many periodic tables still in widespread use suggest (sort it out in 2020, exam boards, please), period 7 is complete, all the elements have been confirmed, and they all have ‘proper’ names.

February featured a post about ruthenium. Its atomic number being not at all significant (there might be a post about rhodium in 2020 😉). Ruthenium and its compounds have lots of uses, including cancer treatments, catalysis, and exposing latent fingerprints in forensic investigations.

March‘s entry was all about a little-known female chemist called Elisabeth Fulhame. She only discovered catalysis. Hardly a significant contribution to the subject. You can’t really blame all those (cough, largely male, cough) chemists for entirely ignoring her work and giving the credit to Berzelius. Ridiculous to even suggest it.

An atom of Mendeleevium, atomic number 101

April summarised the results of the Element Tales Twitter game started by Mark Lorch, in which chemists all over Twitter tried to connect all the elements in one, long chain. It was great fun, and threw up some fascinating element facts and stories. One of my favourites was Mark telling us that when he cleared out his Grandpa’s flat he discovered half a kilogram of sodium metal as well as potassium cyanide and concentrated hydrochloric acid. Fortunately, he managed to stop his family throwing it all down the sink (phew).

May‘s post was written with the help of the lovely Kit Chapman, and was a little trot through the discoveries of five elements: carbon, zinc, helium, francium and tennessine, making the point that elements are never truly discovered by a single person, no matter what the internet (and indeed, books) might tell you.

In June I wrote about something that had been bothering me a while: the concept of describing processes as “chemical” and “physical” changes. It still bothers me. The arguments continue…

In July I came across a linden tree in a local park, and it smelled absolutely delightful. So I wrote about it. Turns out, the flowers contain one of my all-time favourite chemicals (at least in terms of smell): benzaldehyde. As always, natural substances are stuffed full of chemicals, and anyone suggesting otherwise is at best misinformed, at worst outright lying.

In August I wrote about the UK’s unlikely system of units, explaining (for a given value of “explaining”) our weird mishmash of metric and imperial units. As I said to a confused American just the other day, the UK is not on the metric system. The UK occasionally brushes fingers with the metric system, and then immediately denies that it wants anything to do with that sort of thing, thank you very much. This was my favourite post of the year and was in no way inspired by my obsession with the TV adaptation of Good Omens (it was).

In September I returned to one of my favourite targets: quackery. This time it was amber teething necklaces. These are supposed to work (hmm) by releasing succinic acid from the amber beads into the baby’s skin where it… soothes the baby by… some unexplained mechanism. They don’t work and they’re a genuine choking hazard. Don’t waste your money.

October featured a post explaining why refilling plastic bottles might not be quite as simple as you thought. Sure, we all need to cut down on plastic use, but there are good reasons why shops have rules about what you can, and can’t, refill — and they’re not to do with selling more bottles.

November continued the environmental theme with a post was all about some new research into super-slippery coatings that might be applied to all sorts of surfaces, not least ceramic toilet bowls, with the goal of saving some of the water that’s currently used to rinse and clean such surfaces. The best bit about this was that I discovered that synthetic poo is a thing, and that the recipe includes miso. Yummy.

Which brings us to… December, in which I described some simple, minimal-equipment electrolysis experiments that Louise Herbert from STEM Learning had tested out during some teaching training exercises. Got a tic tac box, some drawing pins and a 9V battery? Give it a go!

Well, there we have it. That’s 2019 done and dusted. It’s been fun! I wonder what sort of health scares will turn up for “guilty January”? Won’t be long now…

Like the Chronicle Flask’s Facebook page for regular updates, or follow @chronicleflask on Twitter. Content is © Kat Day 2020. You may share or link to anything here, but you must reference this site if you do. If you enjoy reading my blog, please consider buying me a coffee through Ko-fi using the button below. 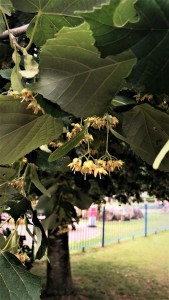 The summer holidays are here! A time when parents of small children find themselves exploring every park in their local vicinity, quite probably several times (whilst hoping against hope that it doesn’t rain). On just such a quest myself, I recently visited one particular park that was filled with a gorgeous smell.

What was it? A bit of sniffing around quickly identified this tree. Now, I am not a botanist (or even much of a gardener), so I immediately resorted to the rather wonderful Seek app by iNaturalist, which uses some very clever image recognition software to identify plants and animals (disclaimer: accuracy is not guaranteed — don’t eat anything based on this app!)

Seek told me that this was a lime tree, or a linden (genus Tilia). A bit of cross-referencing (thanks Dad!) suggested that it had identified the tree correctly. It’s not an uncommon plant: you’ll probably come across it yourself if you go looking (or smelling).

The name ‘linden’ was more familiar to me. The wood is soft and easily worked, and is used to make musical instruments because it has good acoustic properties. It’s also used to make wooden blinds and other pieces of furniture because it’s lightweight, stable, and holds stains and finishes well. 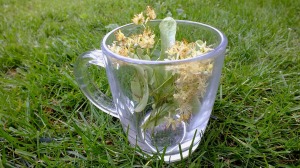 Linden blossoms can be used to make tea.

But let’s go back to the flowers and their delicious scent. The tree blooms during July and August in the Northern hemisphere. The flowers are sometimes described as mucilaginous — which is a fabulous word meaning, basically, thick and sticky. More specifically: “containing a polysaccharide substance that is extracted as a viscous or gelatinous solution and used in medicines and adhesives.”

Linden flowers are a ‘natural remedy’ with a list of applications in herbal medicine as long as your arm. They contain lots of different substances. One that comes up a lot is farnesol, which is actually a type of alcohol. Of course, it’s nothing like the alcohol we’re familiar with from drinks, which is the much simpler ethanol — but it’s important to remember that ‘alcohol’ actually refers to a class of compounds (which, in simple terms, contain an -OH group like the one in the image here) and not a single substance.

The chemical structure of farnesol

Farnesol turns up in lots of essential oils, such as citronella, rose and lemon grass. It’s used in perfumes to enhance floral scents. But plants don’t make substances just to please humans (well, it’s complicated…). It acts as a pheromone for several insects. Sometimes this doesn’t work out so well for the insects, as it confuses their mating behaviour and effectively acts as a natural pesticide. On the other hand, it actively encourages others: bumblebees release farnesol when they return to the hive to spur other bees into action. It’s the bee equivalent of shouting, ‘oi! Move it you lot, pollen this way!’ 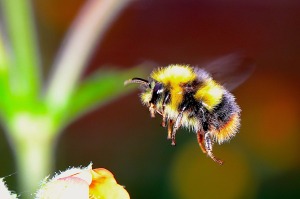 Farnesol acts as a pheromone for bumblebees.

Linden flowers also contain one of my all-time favourite chemicals, benzaldehyde. That’s the one that smells of almonds and isn’t a deadly cyanide salt. Its delicious almondy-ness is the reason it’s used as a flavouring and scent, but it’s also a starting material for loads of different chemicals, for example the dye malachite green, which is used to give a green colour to leather, fabric and paper. A form of this dye called ‘brilliant green‘ is mixed with a second, violet, dye to make ‘Bonney’s blue,’ a disinfectant dye used to mark skin for surgeries. Benzaldehyde is also used to make styrene, which is of course used to make the well-known packing material, polystyrene.

And these are just a couple of the substances found in those yummy-smelling flowers. They also contain arabinogalactans, uronic acid, tannins, rutin, hyperoside, quercitrin, isoquercitrin, astragalin and others. In short, a veritable cocktail of different chemicals.

So next time you smell the scent of a lovely flower, just think about all the amazing chemical substances the plant is making. All natural, of course!