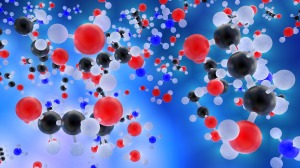 There are literally loads of atoms in everything

What’s a mole? Well, to paraphrase Douglas Adams: atoms are small. You just won’t believe how vastly, hugely, mind-bogglingly small they are. I mean, you may think the latest incarnation of the walnut whip is small, but that’s just peanuts to atoms. Or even walnuts.

Even if we used standard form and wrote that last number as, for example, 3.3 x 1023 it’s a bit of a pain. And chemists are far too busy to write things out in full — why do you think they came up with all these symbols in the first place? — so what we do is we pick a convenient amount, which turns out to be 6.022 x 1023, and call that a “mole”. It’s just like calling twelve eggs “a dozen” only, you know, bigger.

I’m not going to explain the origin of the actual number further than this. There’s an awesome graphic here from Compound Interest and, if you want to know more, just click through.

What I am going to do are some… interesting mole calculations. People usually do grains of sand or coins or something. But those are so boooorrring. It’s nearly Halloween, right? I say we go gruesome.

A healthy adult has about 35 trillion red blood cells in their body at any given moment. (Vampires, presumably, have even more… although… do vampires make their own blood supply? Interesting question…).

Ooh, how about bacteria? We have a lot of those on us, right? In fact, we have more microbes in and on our bodies than human cells! (Well, we can argue about the definition of “human” here, I suppose, but… let’s not.) Apparently there are around 3.8 x 1013 bacteria in our colons which means… damn. This is the blood cells thing all over again, isn’t it? If we took all the humans on the planet, sucked out their gut bacteria (don’t ask) and collected it all together (really, don’t) we’d have, yes, a little under half a mole of microbes.

Don’t tell the tooth fairy’s boss. She really IS scary.

Okay, this is all very well, but it’s not helping us get an idea of scale, is it? All right. Let’s try human teeth. Why not? I mugged the tooth fairy for this one (she’s much tougher than she looks), and it’s about 8 mm long. Adult teeth are a bit larger, of course, but the fairy has less of those. Let’s assume 1 cm to make things easier. That’s 0.01 m. If we had a mole of human teeth they would stack up to… 6.02 x 1021 metres, or 6.02 x 1018 km, or (we need to ramp this up a bit) about 640,000 light years. That would reach a little dwarf galaxy in the constellation of Canes Venatici, somewhere in the general neighbourhood of the Milky Way. Or, alternatively, to Neptune and back…. some 670 million times. Gosh.

There are about half a mole of red blood cells in all the humans on the planet.

… with all the people on the planet, we could make half a billion rings of blood around the sun, one cell thick.

In summary, the mole is a flipping big number. Too big, really, to count anything other than atoms (or molecules, or ions). But it is useful for that.

Look, these numbers are big, right. I’m going to be amazed if there isn’t some sort of order of magnitude mistake. Just… let me know.

If you’re studying chemistry, have you got your Pocket Chemist yet? Why not grab one? It’s a hugely useful tool, and by buying one you’ll be supporting this site – it’s win-win!

Like the Chronicle Flask’s Facebook page for regular updates, or follow @chronicleflask on Twitter. Content is © Kat Day 2020. You may share or link to anything here, but you must reference this site if you do. If you enjoy reading my blog, and especially if you’re using information you’ve found here to write a piece for which you will be paid, please consider buying me a coffee through Ko-fi using the button below.

Want something non-sciency to distract you from, well, everything? Why not check out my fiction blog: the fiction phial.