Acrylamide has been in the news today, and this might be the understatement of the year. Front page newspaper headlines have been yelling everything from “Brits officially warned off chips” to “Over-cooked potatoes and burnt toast could cause cancer” to the marginally more restrained “What is the real cancer risk from eating roast potatoes or toast?” All this has been accompanied by radio interviews with everyone from actual scientists to professional chefs to people keen to share their roast potato recipes. I expect there have been television interviews too – I haven’t had a chance to watch.

Hey, what could be more traditional, or more fun, than a food-health scare in January?

Never fear, the Chronicle Flask is here to sort out the science. Let’s get to the facts: what is acrylamide?

It’s actually a rather small molecule, and it falls into a group of substances which chemists call amides. Other well-known amides include paracetamol and penicillin, and nylon is a polyamide – that is, lots of amide molecules joined together. Amide linkages (the CO-NH bit) are a key feature of proteins, which means they appear in all kinds of naturally-occurring substances.

And this is where the food-acrylamide link comes in. Because acrylamide, or prop-2-enamide to give it its official name (the one only ever used by A-level chemistry students), forms when certain foods are cooked. 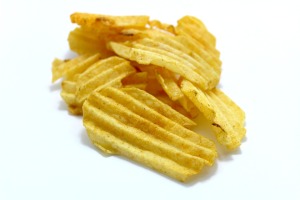 It begins with an amino acid called asparagine. If you’re wondering whether, with that name, it has anything to do with asparagus, you’d be on the right track. It was first isolated in the early 1800s from asparagus juice. It turns out to be very common: it’s found in dairy, meat, fish and shellfish, as well as potatoes, nuts, seeds and grains, amongst other things.

This is where the trouble begins. When asparagine is combined with sugars, particularly glucose, and heated, acrylamide is produced. The longer the food is heated for, the more acrylamide forms. This is a particular issue with anything wheat or potato-based thanks to the naturally-occurring sugars those foods also contain – hence all the histrionics over chips, roast potatoes and toast.

How dangerous is acrylamide? The International Agency for Research on Cancer have classified it as a Group 2A carcinogen, or a “probable” carcinogen. This means there’s “limited evidence” of carcinogenicity in humans, but “sufficient evidence” of carcinogenicity in experimental animals. In other words (usually) scientists know the thing in question causes cancer in rats – who’ve generally been fed huge amounts under strictly controlled conditions – but there isn’t any clear evidence that the same link exists in humans. It’s generally considered unethical to lock humans in cages and force feed them acrylamide by the kilo, so it’s tricky to prove. 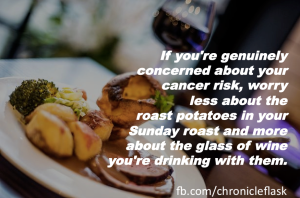 At this point I will point out that alcoholic beverages are classified as Group 1 carcinogens, which means there is “sufficient evidence” of carcinogenicity in humans. Alcohol definitely causes cancer. If you’re genuinely concerned about your cancer risk, worry less about the roast potatoes in your Sunday roast and more about the glass of wine you’re drinking with them.

But back to acrylamide. In animals, it has been shown to cause tumours. It’s one of those substances which can be absorbed through the skin, and after exposure it spreads around the body, turning up in the blood, unexposed skin, the kidneys, the liver and so on. It’s also been shown to have neurotoxic effects in humans. BUT, the evidence that it causes cancer in humans under normal conditions isn’t conclusive. A meta-analysis published in 2014 concluded that “dietary acrylamide is not related to the risk of most common cancers. A modest association for kidney cancer, and for endometrial and ovarian cancers in never smokers only, cannot be excluded.” 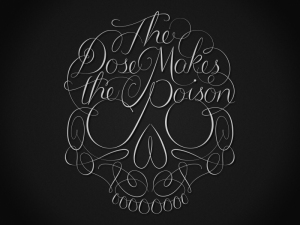 As I so often find myself saying in pieces like this: the dose makes the poison. The people who have suffered neurotoxic effects from acrylamide have been factory workers. In one case in the 1960s a patient was handling 10% solutions of the stuff, and “acknowledged that the acrylamide solution frequently had splashed on his unprotected hands, forearms and face.” The earliest symptom was contact dermatitis, followed by fatigue, weight loss and nerve damage.

Let’s contrast that to the amount of acrylamide found in cooked food. The reason all this fuss erupted today is that the Food Standards Agency (FSA) published some work which estimated the amounts of acrylamide people are likely to be exposed to in their everyday diet.

The highest concentrations of acrylamide were found in snacks (potato crisps etc), and they were 360 μg/kg, or 0.00036 g/kg or, since even the most ardent crisp addict doesn’t usually consume their favoured snacks by the kilo, 0.000036 g/100g. (Remember that those occupational limits are based on continuous exposure over an eight-hour period.)

In other words, the amounts in even the most acrylamide-y of foodstuffs are really quite tiny, and the evidence that acrylamide causes cancer in humans is very limited anyway. There is some evidence that acrylamide accumulates in the body, though, so consuming these sorts of foods day in and day out over a lifetime could be a concern. It might be wise to think twice about eating burnt toast every day for breakfast.

Oh yes, and there’s quite a lot of acrylamide in cigarette smoke. But somehow I doubt that if you’re a dedicated smoker this particular piece of information is going to make much difference.

As the FSA say at the end of their report: 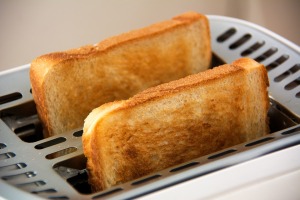 Your toast almost certainly isn’t going to kill you.

“The dietary acrylamide exposure levels for all age classes are of possible concern for an increased lifetime risk of cancer. The results of the survey do not increase concern with respect to acrylamide in the UK diet but do reinforce FSA advice to consumers and our efforts to support the food industry in reducing acrylamide levels.”

This is not, I would suggest, QUITE the same as “Crunchy toast could give you cancer, FSA warns” but, I suppose, “FSA says risk hasn’t really changed” wouldn’t sell as many newspapers.

One last thing, there’s acrylamide in coffee – it forms when the beans are roasted. There’s more in instant coffee and, perhaps counterintuitively, in lighter-roasted beans. No one seems to have mentioned that today, possibly because having your coffee taken away in January is just too terrifying a prospect to even contemplate. And also perhaps because coffee seems to be associated with more health benefits than negatives. Coffee drinkers are less likely to develop type 2 diabetes, Parkinson’s disease, dementia, suffer fewer cases of some cancers and fewer incidences of stroke. Whether the link is causal or not isn’t clear, but coffee drinking certainly doesn’t seem to be a particularly bad thing, which just goes to show that when it comes to diet, things are rarely clearcut.

Pass the crisps, someone.