Well, times are interesting at the moment, aren’t they? I’m not going to talk (much) about The Virus (there’s gonna be a movie, mark my words), because everyone else is, and I’m not an epidemiologist, virologist or an immunologist or, in fact, in any way remotely qualified. I am personally of the opinion that it’s not even especially helpful to talk about possibly-relevant drugs at the moment, given that we don’t know enough about possible negative interactions, and we don’t have reliable data about the older medicines being touted.

In short, I think it’s best I shut up and leave the medical side to the experts. But! I DO know about something relevant. What’s that, I hear you ask? Well, it’s… soap! But wait, before you start yawning, soap is amazing. It is fascinating. It both literally and figuratively links loads of bits of cool chemistry with loads of other bits of cool chemistry. Stay with me, and I’ll explain.

First up, some history (also not a historian, but that crowd is cool, they’ll forgive me) soap is old. Really, really, old. Archaeological evidence suggests ancient Babylonians were making soap around 4800 years ago – probably not for personal hygiene, but rather, mainly, to clean cooking pots. It was originally made from fats boiled with ashes, and the theory generally goes that the discovery was a happy accident: ashes left from cooking fires made it much easier to clean pots and, some experimenting later, we arrived at something we might cautiously recognise today as soap.

The reason this works is that ashes are alkaline. In fact, the very word “alkali” is derived from the Arabic al qalīy, meaning calcined ashes. This is because plants, and especially wood, aren’t just made up of carbon and hydrogen. Potassium and calcium play important roles in tree and plant metabolism, and as a result both are found in moderately significant quantities in wood. When that wood is burnt at high temperatures, alkaline compounds of potassium and calcium form. If the temperature gets high enough, calcium oxide (lime) forms, which is even more alkaline.

You may, in fact, have heard the term potash. This usually refers to salts that contain potassium in a water-soluble form. Potash was first made by taking plant ashes and soaking them in water in a pot, hence, “pot ash”. And, guess where we get the word potassium from? Yep. The pure element, being very reactive, wasn’t discovered until 1870, thousands of years after people first discovered how useful its compounds could be. And, AND, why does the element potassium have the symbol K? It comes from kali, the root of the word alkali.

See what I mean about connections?

Why is the fact that the ashes are alkaline relevant? Well, to answer that we need to think about fats. Chemically, fats are esters. Esters are chains of hydrogen and carbon that have, somewhere within them, a cheeky pair of oxygen atoms. Like this (oxygen atoms are shown red):

Now, this is a picture of butyl ethanoate (aka butyl acetate – smells of apples, by the way) and is a short-ish example of an ester. Fats generally contain much longer chains, and there are three of those chains, and the oxygen bit is stuck to a glycerol backbone.

Thus, the thick, oily, greasy stuff that you think of as fat is a triglyceride: an ester made up of three fatty acid molecules and glycerol (aka glycerine, yup, same stuff in baking). But it’s the ester bit we want to focus on for now, because esters react with alkalis (and acids, for that matter) in a process called hydrolysis.

The clue here is in the name – “hydro” suggesting water – because what happens is that the ester splits where those (red) oxygens are. On one side of that split, the COO group of atoms gains a metal ion (or a hydrogen, if the reaction was carried out under acidic conditions), while the other chunk of the molecule ends up with an OH on the end. We now have a carboxylate salt (or a carboxylic acid) and an alcohol. Effectively, we’ve split the molecule into two pieces and tidied up the ends with atoms from water.

Still with me? This is where it gets clever. Having mixed our fat with alkali and split our fat molecules up, we have two things: fatty acid salts (hydrocarbon chains with, e.g. COO– Na+ on the end) and glycerol. Glycerol is extremely useful stuff (and, funnily enough, antiviral) but we’ll put that aside for the moment, because it’s the other part that’s really interesting.

You may be thinking this is getting technical, but honestly, it’s not. I guarantee you’ve experienced this: think, for example, what happens if you make a salad dressing with oil and vinegar (which is mostly water). The non-polar oil floats on top of the polar water and the two won’t stay mixed. Even if you give them a really good shake, they separate out after a few minutes. 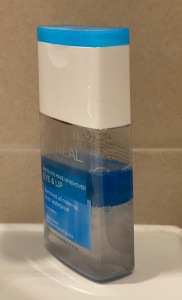 The dark blue oily layer in this makeup remover doesn’t mix with the watery colourless layer.

There are even toiletries based around this principle. This is an eye and lip makeup remover designed to remove water-resistant mascara and long-stay lipstick. It has an oily layer and a water-based layer. To use it, you give the container a good shake and use it immediately. The oil in the mixture removes any oil-based makeup, while the water part removes anything water-based. If you leave the bottle for a minute or two, it settles back into two layers.

But when we broke up our fat molecules, we formed a molecule which can combine with both types of substance. One end will mix with oily substances, and the other end mixes with water. Imagine it as a sort of bridge, joining two things that otherwise would never be connected (see, literal connections!)

There are a few different names for this type of molecule. When we’re talking about food, we usually use “emulsifier” – a term you’ll have seen on food ingredients lists. The best-known example is probably lecithin, which is found in egg yolks. Lecithin is the reason mayonnaise is the way it is – it allows oil and water to combine to give a nice, creamy product that stays mixed, even if it’s left on a shelf for months.

When we’re talking about soaps and detergents, we call these joiny-up molecules “surfactants“. You’re less likely to have seen that exact term on cosmetic ingredients lists, but you will (if you’ve looked) almost certainly have seen one of the most common examples, which is sodium laureth sulfate (or sodium lauryl sulfate), because it turns up everywhere: in liquid soap, bubble bath, shampoo and even toothpaste.

I won’t get into the chemical makeup of sodium laureth sulfate, as it’s a bit different. I’m going to stick to good old soap bars. A common surfactant molecule that you’ll find in those is sodium stearate, which is just like the examples I was talking about earlier: a long hydrocarbon chain with COO– Na+ stuck on the end. The hydrocarbon end, or “tail”, is hydrophobic (“water-hating”), and only mixes with oily substances. The COO– Na+ end, or “head”, is hydrophilic (“water loving”) and only mixes with watery substances.

This is perfect because dirt is usually oily, or is trapped in oil. Soap allows that oil to mix with the water you’re using to wash, so that both the oil, and anything else it might be harbouring, can be washed away.

Which brings us back to the wretched virus. Sars-CoV-2 has a lipid bilayer, that is, a membrane made of two layers of lipid (fatty) molecules. Virus particles stick to our skin and, because of that membrane, water alone does a really bad job of removing them. However, the water-hating tail ends of surfacant molecules are attracted to the virus’s outer fatty surface, while the water-loving head ends are attracted to the water that’s, say, falling out of your tap. Basically, soap causes the virus’s membrane to dissolve, and it falls apart and is destroyed. Victory is ours – hurrah!

Who knew a nearly-5000 year-old weapon would be effective against such a modern scourge? (Well, yes, virologists, obviously.) The more modern alcohol hand gels do much the same thing, but not quite as effectively – if you have access to soap and water, use them!

You may be thinking at this point (if you’ve made it this far), “hang on, if the ancient Babylonians were making soap nearly 5000 years ago, it must be quite easy to make… ooh, could I make soap?!” And yes, yes it is and yes you can. Believe me, if the apocolypse comes I shall be doing just that. People rarely think about soap in disaster movies, which is a problem, because without a bit of basic hygine it won’t be long before the hero is either puking his guts up or dying from a minor wound infection.

Here’s the thing though, it’s potentially dangerous to make soap, because most of the recipes you’ll find (I won’t link to any, but a quick YouTube search will turn up several – try looking for “saponification“) involve lye. Lye is actually a broad term that covers a couple of different chemicals, but most of the time when people say lye these days, they mean pure sodium hydroxide.

Pure sodium hydroxide comes in the form of pellets. It’s dangerous for two reasons. Firstly, precisely because it’s so good at breaking down fats and proteins, i.e. the stuff that humans are made of, it’s really, really corrosive and will give you an extremely nasty burn. Remember that scene in the movie Fight Club? Yes, that scene? Well, that. (Follow that link with extreme caution.)

And secondly, when sodium hydroxide pellets are mixed with water, the solution gets really, really hot.

It doesn’t take a lot of imagination to realise that a really hot, highly corrosive, solution is potentially a huge disaster waiting to happen. So, and I cannot stress this enough, DO NOT attempt to make your own soap unless you have done a lot of research AND you have ALL the appropriate safety equipment, especially good eye protection.

And there we are. Soap is ancient and awesome, and full of interesting chemistry. Make sure you appreciate it every time you wash your hands, which ought to be frequently!

Stay safe, everyone. Take care, and look after yourselves.

Want something non-sciency to distract you? Why not check out my fiction blog: the fiction phial. There are loads of short stories, and even (recently) a poem. Enjoy!

Like the Chronicle Flask’s Facebook page for regular updates, or follow @chronicleflask on Twitter. Content is © Kat Day 2020. You may share or link to anything here, but you must reference this site if you do. If you enjoy reading my blog, please consider buying me a coffee through Ko-fi using the button below.