I’ve mentioned it before, but this summer I got involved with Sense About Science’s Ask for Evidence Campaign. This is a brilliant campaign in which Sense About Science (for some reason they never abbreviate their name to initials) encourages people to ask organisations about dubious ‘scientific’ claims. Ever wondered what on earth Boswelox actually is and whether it can really counteract ‘skin microcontractions’? Ask the company for evidence. See what they say. (In that particular case the UK Advertising Watchdog has already weighed in, but you get the idea.)

Are chia seeds all they’re cracked up to be?

I picked up on a few different claims, the first of which had to do with chia seeds. They are the latest health food craze (well, you know, one of latest – this is an area that moves fast, another health food craze could have gone from magical weight-loss aid to dangerous cancer risk in the time it’s taken me to type this), and come with all manner of interesting claims from stabilising blood sugar levels to having “8 times more Omega 3 than salmon“. The trail led back to AZChia, a company set up by Dr Wayne Coates of the University of Arizona. Although, in Dr Coates defence, many of the more hyperbolic media claims don’t appear to have actually started with him, and his work seems to be rigorous.

There are lots of claims out there in the press, but they most seem to boil down to omega-3 fatty acids. Now, there’s a whole other essay to be written on that topic, but essentially (wait for it) these are essential (boom) fatty acids. That means we need them to maintain good health and although there’s some controversy over exactly what they do and don’t affect, there’s no question they’re vital for a healthy metabolism. However they can’t be made in the body (not from scratch, anyway) so we have to eat them. This is potentially tricky for vegetarians because the main source of omega-3 fatty acids is fish oils. But they do turn up in certain plant foodstuffs, and one such foodstuff is chia seeds. In fact, chia seeds biggest claim is that they are the “richest natural plant source of omega-3 fatty acids“.

But before we go any further with this it’s important to realise that there’s more than one type of omega-3 fatty acid. There is a group of molecules that fall into this category, and some of them are tricker to obtain from certain food sources than others. In particular, there’s something called ALA (α-Linolenic acid), another called EPA (eicosapentaenoic acid) and finally DHA (docosahexaenoic acid – these names just get better and better don’t they?).

The main source of these last two, DHA and EPA, is cold-water oceanic fish, like cod and salmon. Both EPA and DHA are converted into prostaglandins which regulate cell activity. DHA is a structural component of such minor essentials as your brain, retina and skin. Make no mistake, you need these molecules.

ALA is slightly different. ALA is available from plants such as, guess what, chia. And also kiwifruit seeds (bizarrely, these have nearly as much as chia seeds), perilla and flax, otherwise known as linseed. Humans cannot make ALA; we have to eat it. However our bodies can make DHA and EPA from ALA.  So, eat your ALA-packed plants and, in theory, you get the complete set.

But it’s not quite that simple (it never is, is it?)  Yes we can synthesise DHA and EPA from ALA, but only poorly. For adults, it might be less than 1% for DHA, and probably less than 5% for EPA (the numbers are slightly higher, although not much, for babies).

Back to that claim that chia seeds have 8 times more omega-3 than salmon (not, I should stress, a claim actually made by Dr Coates). It is true? Well, 100 g of salmon contains roughly 0.4 g of ALA, whereas 100 g of chia seeds contains more like 18 g. So that’s actually a lot more than 8 times. On the other hand, chia seeds contain no DHA or EPA (fish sources, remember) whereas salmon will give you about 1.4 g and 0.4 g respectively. Chia seeds may contain more omega-3 in total than salmon, but it’s not the good stuff. There’s none of the DHA that’s so important for healthy brain, skin and eyes. You might be able to convert a little bit from the ALA that is there, probably enough to get by (particularly if you’re a vegetarian or a vegan and willing to eat a lot of seeds), but oily fish really is the best source.

What about the claim that chia seeds are the richest plant source of omega-3 fatty acids? I pressed Dr Coates for evidence of this, since it’s a statement he makes on his website, and his response was as follows:

“No one paper is going to say that. You are wanting something that does not exist to my knowledge. You would need to compare hundreds of analyses and papers, determine good analyses from bad, etc. Different harvest cycles, growing locations, varieties, all affect the numbers so impossible to really do it. The statement is based on years of work and knowledge.”

So tricky to prove, but probably true. Possibly.

There is a little more to this story. Chia seeds are often promoted as a whole food, packed full of many nutrients over and above omega-3s. A ‘super-food‘, if you will. They do indeed contain a whole range of nutrients. But Dr Loren Cordain, author of the book The Paleo Diet, contends that chia seeds also contain high levels of phytate.  Phytate is the salt of phytic acid, and is a substance that binds minerals such as calcium, iron, zinc, magnesium and copper, making them unavailable for absorption by the body. As a result, chia seeds are actually quite a poor source of these minerals. And, as with all plants, it’s a similar situation with vitamin B6 – it’s something we absorb far more effectively from animal sources. In short, just because something’s in a plant, doesn’t mean we can make use of it. 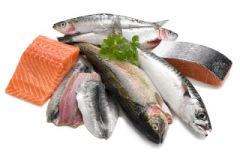 If you’re not a vegetarian, stick to your oily fish.

So, in summary, should you be sprinkling chia on your breakfast cereal? Well, it probably won’t do any harm. If you’re a strict vegetarian or vegan they may be worth considering, although they’re probably not worth paying a lot of money for. If you’re a meat eater, you’re almost certainly better off sticking with oily fish – it’s a much better source of the really essential fatty acids.

I also investigated some other claims for Ask for Evidence, one of which was the statement made by Health Journalist Hazel Courteney on national radio that “the average person absorbs into their bloodstream alone about 14 kg of toxins annually through their skin.” There is more to follow on this particular story, and it should appear on the Ask for Evidence page shortly.

There was also something on anti-bac pens which I’ll discuss next time. Watch this space!