A couple of days ago I was listening to the latest Radiolab podcast. If you’ve never listened to one of these, you really should. They are beautifully produced and, without fail, utterly fascinating. Over the last year or so I’ve learned about a possible cure for a disease with a 100% mortality rate, an apocryphal Russian story about horses frozen into a block of ice, and a new theory for the end of the dinosaurs where, if I understood it correctly, they were essentially grilled to death. Episodes of Radiolab always feel like a thoroughly good use of brain-time.

Anyway, if you’re still with me and haven’t dashed off to immediately download some of these little gems, the most recent episode is about weights and measures and how we’ve standardised them over the years. In particular the kilogram, which is the last physical standard in use, although possibly not for long (listen to the podcast). 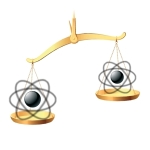 So what are the scales made of…?

This got me thinking about atoms and, in particular, how we decide their mass. This matters you see, because the mass of atoms tells us chemists how much stuff to use. If I want a saline solution with a particular concentration, all I need do is look up the numbers on the periodic table, weigh out the appropriate amount of salt and dilute it with the appropriate amount of water. And if you’re a patient who needs a saline drip, you’d better hope I did it correctly.

Anyway, if you remember your periodic table (which of course you do, but just in case, here’s a picture) all the elements come with two numbers.

One of these numbers is the atomic number, which is the number of protons in the nucleus of each atom of the element. Conveniently, nature has managed to produce an atomic nucleus for each number between 1 and, at last count, 118 and if you ‘read’ the periodic table from left to right, top to bottom, you’ll see the numbers go up one at a time.

The other number, relative atomic mass, is a bit less tidy. It still goes up as you go along the periodic table, but in less regular jumps of roughly between one and three.  Without going into lots of detail, relative atomic mass is standardised against 1⁄12 the mass of carbon-12. Which begs the question, why? The more mathematically aware will have clocked that 1⁄12 of 12 is, well, 1. So why don’t we compare all the elements to hydrogen, which actually has a mass of 1? Or if that’s infeasible for some reason why not, I don’t know, choose 1⁄9 of beryllium-9, or 1⁄28 of silicon-28?

Well actually, almost exactly 200 years ago now, atomic mass (called atomic weight, at the time) was originally compared to hydrogen, and it was thought that all elements would have masses which were exact multiples of hydrogen’s.

The problem with this was that as measuring techniques became more sophisticated it became clear that some elements were inconveniently failing to follow the rule. In fact, some were downright contrary, like chlorine which appeared to have a mass which wasn’t even a whole number.

This was, at least partially, sorted out in 1932 when James Chadwick proved the existence of neutrons. The existence of isotopes had already been suggested, but this finally cleared up what the pesky things actually were. It turns out some atoms are fatter than others, having one or two more uncharged particles in their nuclei. This doesn’t change what atom they are – they still have the same number of protons – but it does make them a bit heavier. Take a sample of pure chlorine, for example, and you find that roughly three quarters of the atoms in it have a mass of 35, whereas the other quarter have a mass of 37. These are the isotopes of chlorine: imaginatively named chlorine-35 and chlorine-37. Work out the weighted average of the two and you get 35.5, which is the number you see on periodic tables.

In the mid-20th century something of a minor squabble between chemists and physicists broke out (chemists and physicists often squabble: they’re a bit like the English and the French: they like to visit each other but only so that they can moan about how annoying the other lot are and how badly they do everything). By this time had been a switch from using hydrogen (the lightest element) to oxygen as the standard to which other elemental masses were compared. This was mainly for the convenience of chemical analysis: oxygen combines with a lot of things to make straightforward oxides, whereas hydrides are less common and trickier to work with. Plus, large quantities of hydrogen gas are a bit (in the sense of an elephant being a bit heavy, or cyanide being a bit poisonous) of an explosion risk. Oxygen causes other things to burn jolly nicely, but isn’t actually flammable itself. If you can manage to keep it away from other flammable stuff it’s a far safer option.

The problem was that chemists were using a mass scale based on assigning the number 16 to a natural mixture of oxygen (which contains mostly oxygen-16, with little bits of oxygen-17 and oxygen-18). Physicists, on the other hand, had instead assigned the number 16 to the isotope oxygen-16, which they had isolated using the technique of mass spectrometry. 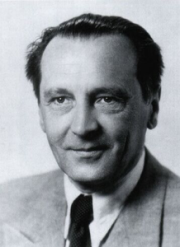 You may think the physicists’ method sounds more logical, but the chemists’ reasoning was that in naturally-occurring compounds there would be a mixture of isotopes, so it made sense to use a number based on that mixture since you never actually encounter one atom on its own. Either way, the result was differences in the numbers, admittedly some way down the decimal places, but none the less a difference. Of course it was possible to convert between the two, but at the time scientists were fiddling with such tricksy things as nuclear energy and, of course, bombs. Even a tiny discrepancy in the nth decimal place was potentially catastrophic. Something had to be done. 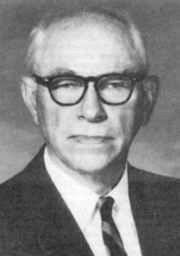 In 1961 a compromise was agreed, thanks largely to the combined efforts of the physicist Josef Mattauch and the chemist Edward Wichers, who set about persuading their respective groups to be reasonable and play nicely with each other.

The result was that carbon-12 was assigned a mass of exactly 12 and the relative atomic mass scale became based on that. The choice of carbon was, to an extent, somewhat arbitrary. It suited the physicists, who were already using carbon as a standard for mass spectrometry. It fell in between the two previous values (1 for hydrogen and 16 for oxygen), which meant it wouldn’t throw every existing piece of work out by too much. In particular, chemists weren’t keen on switching to the physicists’ method of 1⁄16 of the oxygen-16 isotope, because it would change their numbers quite significantly. Switching to 1⁄12 of carbon-12 meant, surprisingly, a smaller change. Carbon is also, of course, a naturally abundant element and it was easy to get samples of pure carbon.

And that, as they say, is that. The carbon-12 scale is still used today, over 50 years later, and it’s not going anywhere. Hydrogen is officially 1⁄12 the mass of carbon-12, and we use carbon-12 because, basically, it was the only option the chemists and physicists would agree on. Hey, it’s as good a reason as any.