141 billion litres of water are used to flush toilets every day.

There was also more than one person asking WHY, given everything going on at the moment, scientists are spending their time on something which seems, well, not terribly urgent. After all, ceramic toilet bowls are already quite slippery. Toilet brushes exist. We have a myriad of toilet cleaning chemicals. Surely there are higher priorities? Attempting to deal with looming environmental disaster, say?

But here’s the thing, from an environmental point of view, flush toilets are quite significant. If you’re fortunate enough to live somewhere they’re ubiquitous it’s easy to take them for granted, but consider this: flushing even a water-efficient toilet uses at least five litres of water (much more for older models, a bit less if you use a ‘half-flush’ function). Often this is perfectly clean water which has been through water treatment, only to be immediately turned back into, effectively, sewage. Now imagine you have something a bit… ahem… sticky to flush. What do you do? You flush the toilet twice. Maybe more. You break out the toilet brush and the bottle of toilet cleaner, and then you probably flush at least one extra time to leave the bowl clean.

Consider that the average person uses the toilet about five times and day and multiply up by the population and, even just in the UK, we’re looking at billions of litres of water daily. Globally, it’s estimated that 141 billion litres of fresh water are used daily for toilet flushing, and in some homes it could account for a quarter of indoor wastewater production. That’s a lot of fresh water we’re chucking, quite literally, down the toilet.

It rains a fair bit in the U.K. so, except for the occasional dry summer, Brits aren’t in the habit of worrying too much about water supply. The opposite, if anything. But we need to change our ways. In a speech in March this year, Sir James Bevan, Chief Executive of the Environment Agency, warned that the U.K. could run into serious water supply problems in 25 years due to climate change, population growth and poor water management.

Even putting those warnings to one side, treating water uses energy and resources. Filters are used which have to be cleaned and replaced, chemical coagulants and chlorine (usually in the form of low levels of chlorine dioxide) have to be added. Sometimes ozone dosing is used. The pH of the water needs to be checked and adjusted. All of these chemicals have to be produced before they’re used to treat the some 17 billion litres of water that are delivered to UK homes and businesses every day. And, of course, the whole water treatment process has to be continuously and carefully monitored, which requires equipment and people. None of this comes for free.

So, yes, saving fresh water is important. Plugging leaks and using water-saving appliances is vital. And, given that everyone has to go to the toilet several times a day, making toilets more efficient is potentially a really significant saving. An super non-stick toilet surface could mean less flushing is needed and, probably, fewer cleaning products too — saving chemical contamination. 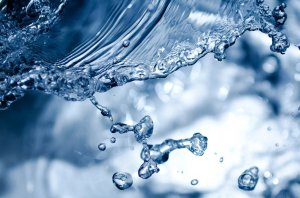 Fresh water is a valuable resource.

The new super-slippery surface was co-developed by Jing Wang in the Department of Mechanical Engineering at the University of Michigan. It’s called a liquid-entrenched smooth surface (LESS) and is applied in two stages. First, a polymer spray, which dries to form nanoscale hair-like strands. The second spray completely covers these ‘hairs’ with a thin layer of lubricant, forming an incredibly flat, and very slippery, surface. The researchers tested the surface with various liquids and synthetic faecal matter and the difference — as seen in the video on this page — is really quite astonishing.

Hold up a moment, synthetic faecal matter? I’ll bet no one embarking on an engineering degree ever imagines that, one day, they might be carefully considering the make-up of artificial poo. But actually, when you think about it, it’s quite important. Quite aside from safety aspects and the sheer horror of the very idea, you couldn’t use the real thing to test something like this. You need to make sure it has a carefully-controlled consistency, for starters. It’s the most basic principle, isn’t it? If you want to test something, you have to control your variables.

Indeed, there’s even a scale. It’s called the Bristol stool scale, and it goes from “hard” to “entirely liquid”. Synthetic poo is a mixture of yeast, psyllium, peanut oil, miso (proof, if it were needed, that miso really does improve everything), polyethylene glycol, calcium phosphate, cellulose and water. The amount of water is adjusted to match different points on the Bristol scale. Aren’t science and engineering fun?

Anyway. Back to the non-stick technology. This new surface can be applied to all sorts of materials including ceramic and metal, and it repels liquids and ‘viscoelastic solids‘ (stuff that’s stretchy but also resists flow: apart from poo, PVA slime is another example) much more effectively than other types of non-stick surfaces. In fact, the researchers say it’s up to 90% more effective than even the best repellent materials, and they estimate that the amount of water needed to clean a surface treated in this way is 10% that needed for ordinary surfaces. They were also able to show that bacteria don’t stick to LESS-coated materials, meaning that even if untreated water is used to flush a toilet, it remains hygienic without the need for extra chemicals.

The potential to cut 141 billion litres of water by a factor of ten is not to be (I’m sorry) sniffed at. Plus, in some areas, ready supplies of water and the facilities to clean toilets just aren’t available. Using LESS could, potentially, reduce the spread of infection.

So what IS this surface treatment made of? This information wasn’t widely reported, but it seems quite important, not least because applications of LESS are estimated to last for about 500 flushes, which suggests that re-application will be needed fairly regularly and, perhaps more worryingly, whatever-it-is is passing into the wastewater supply.

Not surprisingly, there’s a certain amount of vagueness when it comes to its exact make-up, but I did find some details. Firstly, it’s what’s known as a graft polymer, that is, a polymer chain with long side chains attached — these are the “hairs” described by the researchers.

Secondly, the polymer strands are based on polydimethylsiloxane, or PDMS. This may sound terrifying, but it’s really not. PDMS (also known as dimethicone) is a silicone — a compound made up of silicon, oxygen, carbon and hydrogen. These compounds turn up all over the place. They’re used contact lenses, shampoos, and even as food additives. Oh, and condom lubricants. So… pretty harmless. In fact, they’re reported as having no harmful effects or organisms or the environment. The one downside is that PDMS isn’t biodegradable, but it is something that’s absorbed at water treatment facilities already, so nothing new would need to be put in place to deal with it.

The problem of better toilets might be more urgent than you thought.

Finally, the lubricant which is sprayed over the polymer chains in the second stage of the treatment to make the surface “nanoscopically smooth” (that is, flat on a 1 billionth of a metre scale) is plain old silicone oil, which is, again, something with a low environmental impact and generally considered to be very safe.

As always with environmental considerations it’s about choosing the least bad option, and using these coatings would certainly seem to be a far better option than wasting billions of gallons of precious fresh water.

In short, silly headlines aside, it turns out that making toilets better might be quite an important problem. Maybe it’s time to rage against the latrine.