As has become traditional, I’m finishing off this year with a round-up of 2018’s posts. It’s been a good year: a few health scares which turned out to be nothing much to worry about, one which turned out to be a genuine danger, a couple of cool experiments and some spectacular shiny balls. So without further ado, here we go…

Things were a bit hectic at the start of this year (fiction writing was happening) and as a result January was quiet on the blog. But not on the Facebook page, where I posted a couple of general reminders about the silliness of alkaline diets which absolutely exploded, achieving some 4,000 shares and a reach (so Facebook tells me anyway) of over half a million people. Wow. And then I posted a funny thing about laundry symbols which went almost as wild. It’s a strange world.

February featured BPA: an additive in many plastics.

In February I wrote a piece about BPA (Bisphenol A), which was the chemical scare of the day. There’s always one around January/February time. It’s our penance for daring to enjoy Christmas. Anyway, BPA is a chemical in many plastics, and of course plastic waste had become – and remains – a hot topic. BPA is also used in a number of other things, not least the heat sensitive paper used to produce some shopping receipts. It’s not a harmless substance by any means, but it won’t surprise anyone to learn that the risks had, as is usually the case, been massively overstated. In a report, the European Food Safety Authority said that the health concern for BPA is low at their estimated levels of exposure. In other words, unless you’re actually working with it – in which case you should have received safety training – there’s no need to be concerned.

In March I recorded an episode for the A Dash of Science podcast, and I went on to write a post about VARD, which stands for Verify, Author, Reasonableness and Date. It’s my quick and easy way of fact-checking online information – an increasingly important skill these days. Check out the post for more info.

April ended up being all about dairy and vitamin D.

April was all about dairy after a flare-up on Twitter on the topic, and went on to talk about vitamin D. The bottom line is that everyone in the UK should be taking a small vitamin D supplement between about October and March, because northern Europeans simply can’t make vitamin D3 in their skin during these months (well, unless they travel nearer to the equator), and it’s not a nutrient we can easily get from our food. Are you taking yours?

May featured fish tanks, following a widely reported story about a fish-owner who cleaned out his tank and managed to release a deadly toxin that poisoned his entire family. Whoops. It turns that this was, and is, a real risk – so if you keep fish and you’ve never heard of this before, do have a read!

In June I wrote about strawberries, and did a neat experiment to show that strawberries could be used to make pH indicator. Who knew? You do, now! Check it out if you’re looking for some chemistry to amuse yourself over the holidays (I mean, who isn’t?). Did you know you can make indicators from the leaves of Christmas poinsettia plants, too? 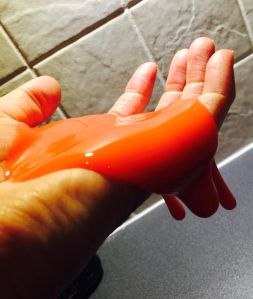 Slime turned up again in July. And December. And will probably keep on rearing its slimy head.

July brought a subject which has turned up again recently: slime. I wrote about slime in 2017, too. It’s the gift that keeps on giving. This time it flared up because the consumer magazine and organisation Which? kept promoting research that, they claimed, showed that slime toys contain dangerous levels of borax. It’s all rather questionable, since it’s not really clear which safety guidelines they’re applying and whether they’re appropriate for slime toys. Plus, the limits that I was able to find are migration limits. In other words, it’s not appropriate to measure the total borax content of the slime and declare it dangerous – they should be looking at the amount of borax which is absorbed during normal use. Unless your child is eating slime (don’t let them do that), they’re never going to absorb enough borax to do them any harm. In other words, it’s a storm in a slimepot.

August was all about carbon dioxide, after a heatwave spread across Europe and there was, bizarrely, a carbon dioxide shortage which had an impact on all sorts of things from fizzy drinks to online shopping deliveries. It ended up being a long-ish post which spanned everything from the formation of the Earth, the discovery of carbon dioxide, fertilisers and environmental concerns.

In September I turned my attention to a chemical reaction which is still to this day used to coat the inside of glass decorations with a thin layer of reflective silver, and has connections with biochemistry, physics and astronomy. Check it out for some pretty pictures of silver balls, and my silver nitrate-stained fingers.

In October I was lucky enough to go on a ‘fungi forage’ and so, naturally, I ended up writing all about mushrooms. Did you know that a certain type of mushroom can be used to make writing ink? Or that some mushrooms change colour when they’re damaged? No? You should go back and read that post, then! (And going back to April for a moment, certain mushrooms are one of the few sources of vitamin D.)

Finally, November ended up being all about water, marking the 235th anniversary of the day that Antoine Lavoisier formally declared water to be a compound. It went into the history of water, how it was proven to have the formula H2O, and I even did an experiment to split water into hydrogen and oxygen in my kitchen – did you know that was possible? It is!

As December neared, the research for my water piece led me to suggest to Andy Brunning of Compound Interest that this year’s Chemistry Advent might feature scientists from the last 24 decades of chemistry, starting in the 1780s (with Lavoisier and Paulze) and moving forward to the current day. This turned out to be a fantastic project, featuring lots of familiar and not quite so-familiar scientists. Do have a look if you didn’t follow along during December.

And that’s it for this year. I hope it’s been a good one for all my readers, and I wish you peace and prosperity in 2019! Suggestions for the traditional January Health Scare, anyone? (Let’s hope it’s not slime again, I’m getting really tired of that one now…)

If you enjoy reading my blog, please consider buying me a coffee (I promise to use a reusable cup) through Ko-fi using the button below.