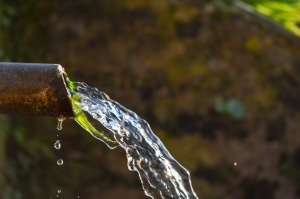 November 2018 marks the 235th anniversary of the day when Antoine Lavoisier proved water to be a compound, rather than an element.

I’m a few days late at the time of writing, but November 12th 2018 was the 235th anniversary of an important discovery. It was the day, in 1783, that Antoine Lavoisier formally declared water to be a compound, not an element.

235 years seems like an awfully long time, probably so long ago that no one knew anything very much. Practically still eye of newt, tongue of bat and leeches for everyone, right? Well, not quite. In fact, there was some nifty science and engineering going on at the time. It was the year that Jean-François Pilâtre de Rozier and François Laurent made the first untethered hot air balloon flight, for example. And chemistry was moving on swiftly: lots of elements had been isolated, including oxygen (1771, by Carl Wilhelm Scheele) and hydrogen (officially by Henry Cavendish in 1766, although others had observed it before he did).

Cavendish had reported that hydrogen produced water when it reacted with oxygen (known then as inflammable air and dephlogisticated air, respectively), and others had carried out similar experiments. However, at the time most chemists favoured phlogiston theory (hence the names) and tried to interpret and explain their results accordingly. Phlogiston theory was the idea that anything which burned contained a fire-like element called phlogiston, which was then “lost” when the substance burned and became “dephlogisticated”.

Cavendish, in particular, explained the fact that inflammable air (hydrogen) left droplets of “dew” behind when it burned in “common air” (the stuff in the room) in terms of phlogiston, by suggesting that water was present in each of the two airs before ignition. 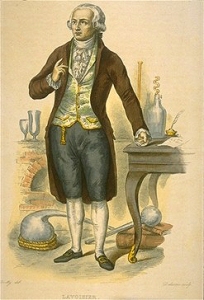 Antoine-Laurent Lavoisier proved that water was a compound. (Line engraving by Louis Jean Desire Delaistre, after a design by Julien Leopold Boilly.)

Lavoisier was very much against phlogiston theory. He carried out experiments in closed vessels with enormous precision, going to great lengths to prove that many substances actually became heavier when they burned and not, as phlogiston theory would have it, lighter. In fact, it’s Lavoisier we have to thank for the names “hydrogen” and “oxygen”. Hydrogen is Greek for “water-former”, whilst oxygen means “acid former”.

When, in June 1783, Lavoisier found out about Cavendish’s experiment he immediately reacted oxygen with hydrogen to produce “water in a very pure state” and prove that the mass of the water which formed was equal to the combined masses of the hydrogen and oxygen he started with.

He then went on to decompose water into oxygen and hydrogen by heating a mixture of water and iron filings. The oxygen that formed combined with the iron to form iron oxide, and he collected the hydrogen gas over mercury. Thanks to his careful measurements, Lavoisier was able to demonstrate that the increased mass of the iron filings plus the mass of the collected gas was, again, equal to the mass of the water he had started with.

Water is a compound of hydrogen and oxygen, with the formula H2O.

There were still arguments, of course (there always are), but phlogiston theory was essentially doomed. Water was a compound, made of two elements, and the process of combustion was nothing more mysterious than elements combining in different ways.

As an aside, Scottish chemist Elizabeth Fulhame deserves a mention at this point. Just a few years after Lavoisier she went on to demonstrate through experiment that many oxidation reactions occur only in the presence of water, but the water is regenerated at the end of the reaction. She is credited today as the chemist who invented the concept of catalysis. (Which is a pretty important concept in chemistry, and yet her name never seems to come up…)

Anyway, proving water’s composition becomes a lot simpler when you have a ready supply of electricity. The first scientist to formally demonstrate this was William Nicholson, in 1800. He discovered that when leads from a battery are placed in water, the water breaks up to form hydrogen and oxygen bubbles, which can be collected separately at the submerged ends of the wires. This is the process we now know as electrolysis.

You can easily carry out the electrolysis of water at home.

In fact, this is a really easy (and safe, I promise!) experiment to do yourself, at home. I did it myself, using an empty TicTac box, two drawing pins, a 9V battery and a bit of baking soda (sodium hydrogencarbonate) dissolved in water – you need this because water on its own is a poor conductor.

The drawing pins are pushed through the bottom of the plastic box, the box is filled with the solution, and then it’s balanced on the terminals of the battery. I’ve used some small test tubes here to collect the gases, but you’ll be able to see the bubbles without them.

Bubbles start to appear immediately. I left mine for about an hour and a half, at which point the test tube on the negative terminal (the cathode) was completely full of gas, which produced a very satisfying squeaky pop when I placed it over a flame.

The positive electrode (the anode) ended up completely covered in what I’m pretty sure is a precipitate of iron hydroxide (the drawing pins presumably being plated steel), which meant that very little oxygen was produced after the first couple of minutes. This is why in proper electrolysis experiments inert graphite or, even better, platinum, electrodes are used. If you do that, you’ll get a 1:2 ratio by volume of oxygen to hydrogen, thus proving water’s formula (H2O) as well.

So there we have it: water is a compound, and not an element. And if you’d like to amuse everyone around the Christmas dinner table, you can prove it with a 9V battery and some drawing pins. Just don’t nick the battery out of your little brother’s favourite toy, okay? (Or, if you do, don’t tell him it was my idea.)

If you enjoy reading my blog, please consider buying me a coffee through Ko-fi using the button below.

5 thoughts on “What is Water? The Element that Became a Compound”