We’ve made it! Not only to 2018 (which was starting to look doubtful earlier in the year), but also to the Chronicle Flask’s 100th post. Which doesn’t seem that many, really, but since posts on here frequently run to 1500 words, that adds up to a rather more impressive-sounding 150,000 words or so. I mean, that’s like… half a Brandon Sanderson novel. Oh.

Last January I began with a post about acrylamide. We’d all been enjoying lots of lovely crispy food over Christmas; it was time to tell us about the terrible dangers of such reckless indulgence. The newspapers were covered with pictures of delicious-looking chips, toast and roast potatoes alongside scary headlines such as:  “Crunchy toast could give you cancer, FSA warns”. The truth was not quite so dramatic. Acrylamide does form when foods are cooked to crispiness, and it is potentially harmful, but the quantities which form in food are tiny, and very unlikely to cause you any serious harm unless you literally live on nothing but burnt toast. The FSA (Food Standards Agency) hadn’t significantly revised their guidelines, it turned out, but were in fact only suggesting that the food industry should be mindful of acrylamide levels in food and seek to reduce them as much as possible. That wouldn’t have made for quite such a good “your food is going to killllll you!” story though, I suppose.

In February the spikey topic of vaccination came up. Again. Vaccines are awesome. They protect us from deadly diseases. No, I don’t want to hear any nonsense about “Big Pharma“, and I definitely don’t want to hear how “natural immunity” is better. It’s not. At best, it might provide a similar level of protection (but not in every case), but it comes with having to suffer through a horrible, dangerous disease, whereas vaccination doesn’t. It ought to be a no-brainer. Just vaccinate your kids. And yourself.

It was Red Nose Day in the UK in March, which brought some chemistry jokes. Turns out all the best ones aren’t gone, after all. Did you hear about the PhD student who accidentally cooled herself to absolute zero? She’s 0K now.

April brought a post which ought to have been an April Fool’s joke, but wasn’t. Sceptics often point out that homeopathy is just sugar and water, but the trouble is, sometimes, it’s not. There’s virtually no regulation of homeopathy. As far as I’ve been able to establish, no one tests homeopathic products; no one checks the dilutions. Since a lot of the starting materials are dangerously toxic substances such as arsenic, belladona, lead and hemlock, this ought to worry people more than it does. There has been more than one accidental poisoning (perhaps most shockingly, one involving baby teething products). It really is time this stuff was banned, maybe 2018 will be the year.

In May I turned to something which was to become a bit of a theme for 2017: alkaline water. It’s not so much that it doesn’t do anything (although it really doesn’t), more the fact that someone is charging a premium for a product which you could literally make yourself for pennies. It’s only a matter of dissolving a pinch of baking soda (sodium bicarbonate) in some water.

June brought a selection of periodic tables because, well, why not? This is a chemistry blog, after all! And now we’ve finally filled up period seven they do have a rather elegant completness. 2019, by the way, has just been announced as the International Year of the Periodic Table of Chemical Elements, to coincide with IUPAC’s 100th anniversary and the 150th anniversary of Mendeelev’s discovery of periodicity (his presentation, The Dependence Between the Properties of of the Atomic Weights of the Elements, was made on 6th March 1869). Looks like 2019 will be an exciting year for chemists!

In July it was back to the nonsense of alkaline diets again, when Robert O. Young was finally sentenced to 3 years, 8 months in custody for conning vulnerable cancer patients into giving him large sums of money for ineffective and dangerous treatments. Good. Moving on.

August brought me back to a post that I’d actually started earlier in the year when I went to a March for Science event in April. It was all about slime, and August seemed like a good time to finally finish it, with the school holidays in full swing – what could be more fun on a rainy day at home than making slime? Slime was a bit of a 2017 craze, and there have been a few stories featuring children with severely irritated skin. But is this likely to be caused by borax? Not really. Turns out it’s actually very safe. Laundry detergents in general, not so much. In short, if you want to make slime the traditional way with PVA glue and borax, fill your boots. (Not really – your parents will be uninpressed.)

In September it was back to quackery: black salve. A nasty, corrosive concoction which is sold as a cancer cure. It won’t cure your cancer. It will burn a nasty great big hole in your skin. Do not mess with this stuff.

October carried on in a similar vein, literally. This time with a piece about naturopaths recommending hydrogen peroxide IVs as a treatment for lots of things, not least – you guessed it – cancer. Yes, hydrogen peroxide. The stuff you used to bleach hair. Intraveneously. Argh. 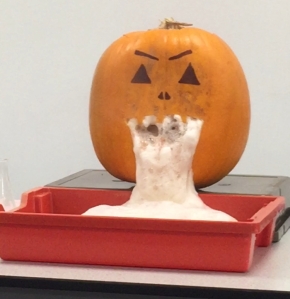 The end of the month featured a far better use for hydrogen peroxide, that of the puking pumpkin. Definitely one to roll out if, for any reason, you ever find yourself having to demonstrate catalysis.

November brought us, somewhat unseasonally, to tomatoes. Where is the best place to store them? Fridge or windowsill? Turns out the answer involves more chemistry than you might have imagined.

And then, finally, December. Looking for a last-minute Christmas gift? Why not buy a case of blk water? I mean, other than it’s an exorbitantly priced bottle of mysterious black stuff which doesn’t do any of the things it claims to do, and might actually get its colour from coal deposits, that is.

And that, dear friends and followers, is it for 2017! Happy New Year! Remember to be sceptical when the inevitable “deadly food” story appears in a few weeks….