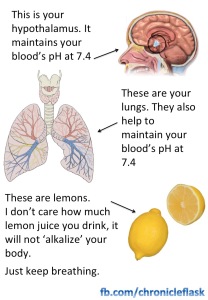 I’ve written about the absurdity of alkaline diets before, and found myself embroiled in more than one argument about the idea.

To sum up quickly, it’s the notion that our bodies are somehow “acidic”, and if only we could make them “alkaline” all our health problems – cancer included – would disappear. The way you make your body “alkaline” is, mainly, by eating lots of vegetables and some fruits (particularly citrus fruits – yes, I know, I know).

The eating fruit and vegetables bit aside (they’re good for you, you should eat them), it’s all patent nonsense. Our bodies aren’t acidic – well, other than where they’re supposed to be acidic (like our stomachs) – and absolutely nothing we eat or drink can have any sort of effect on blood pH, which is kept firmly between 7.35-7.45 by (mainly) our lungs and kidneys. And if your kidneys or lungs are failing, you need something a little stronger in terms of medical intervention than a slice of lemon.

But who first came up with this crazy idea? 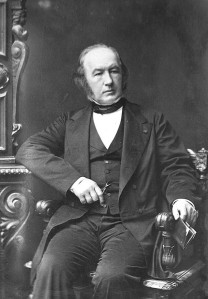 Actually, we can probably blame a nineteenth century French biologist and physiologist, Claude Bernard, for kicking the whole thing off, when he noticed that if he changed the diet of rabbits from largely plant-based to largely animal-based (i.e. from herbivorous to carnivorous) their urine became more acidic.

This observation, followed by a lot of speculation by nutritionists and some really quite impressively dodgy leaps of reasoning (by others, I should stress – not Bernard himself), has lead us to where we are now: umpty-million websites and books telling anyone who will listen that humans need to cut out all animal products to avoid becoming “acidic” and thus ill.

Bernard’s rabbits were, it seems, quite hungry when he got them – quite possibly they hadn’t been fed – and he immediately gave them boiled beef and nothing else. Meat contains the amino acids cysteine and methionine, both of which can produce acid when they’re metabolised (something Bernard didn’t know at the time). The rabbits excreted this in their urine, which probably explains why it became acidic.

Now, many of you will have noticed several problems here. Firstly, rabbits are herbivores by nature (they do not usually eat meat in the wild). Humans aren’t herbivores. Humans are omnivores, and we have quite different digestive processes as a result. It’s not reasonable to extrapolate from rabbits to humans when it comes to diet. Plus, even the most ardent meat-lover probably doesn’t only eat boiled beef – at the very least people usually squeeze in a battered onion ring or a bit of coleslaw along the way. Most critically of all, urine pH has no direct relationship with blood pH. It tells us nothing about the pH of “the body” (whatever we understand that to mean).

The notion that a plant-based diet is somehow “alkaline” should really have stayed in the 19th century where it belonged, and at the very least not limped its way out of the twentieth. Unfortunately, somewhere in the early 2000s, a man called Robert O Young got hold of the idea and ran with it. 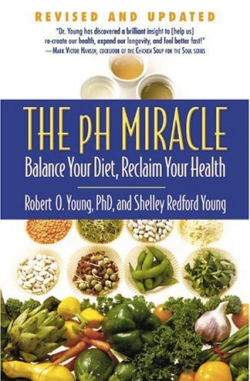 Young’s books – which are still available for sale at the time of writing – describe him as “PhD”, even though he has no accredited qualification.

All of these books describe him either as “Dr Robert O Young” or refer to him as “PhD”. But he has neither a medical qualification nor a PhD, other than one he bought from a diploma mill – a business that offers degrees for money.

The books all talk about “an alkaline environment” and state that so-called acidic foods and drinks (coffee, tea, dried fruit, anything made with yeast, meat and dairy, amongst other foodstuffs) should be avoided if not entirely eliminated.

Anyone paying attention will quickly note that an “alkaline” diet is basically a very restrictive vegan diet. Most carbohydrate-based foods are restricted, and lots of fruits and nuts fall into the “moderately” and “mildly” acidic categories. Whilst a vegan diet can be extremely healthy, vegans do need to be careful that they get the nutrients they need. Restricting nuts, pulses, rice and grains as well as removing meat and dairy could, potentially, lead to nutritional deficiencies.

Young also believes in something called pleomorphism, which is a whole other level of bonkers. Essentially, he thinks that viruses and bacteria aren’t the cause of illnesses – rather, the things we think are viruses and bacteria are actually our own cells which have changed in response to our “acidic environments”. In Young’s mind, we are making ourselves sick – there is one illness (acidosis) and one cure (his alkaline diet).

It’s bad enough that he’s asserting such tosh and being taken seriously by quite a lot of people. It’s even worse that he has been treating patients at his ranch in California, claiming that he could “cure” them of anything and everything, including cancer.

One of his treatments involved intravenous injections of solutions of sodium hydrogen carbonate, otherwise known as sodium bicarbonate or baking soda. This common cookery ingredient does produce an alkaline solution (about pH 8.5) when dissolved in water, but remember when I said blood pH was hard to shift? 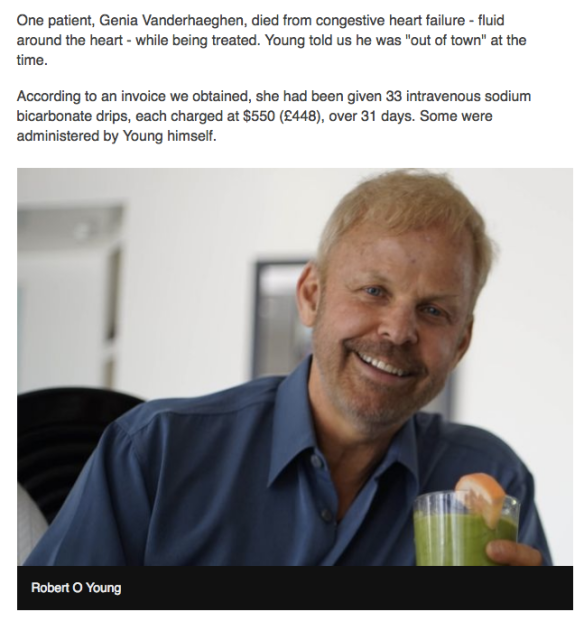 Well, it is, and for good reason. If blood pH moves above the range of 7.35-7.45 it causes a condition called alkalosis. This can result in low blood potassium which in turn leads to muscle weakness, pain, and muscle cramps and spasms. It can also cause low blood calcium, which can ultimately result in a type of seizure. Putting an alkaline solution directly into somone’s blood is genuinely dangerous.

And this is before we even start to consider the fact that someone who was not a medical professional was recommending, and even administering, intravenous drips. Which, by the way, he was reportedly charging his patients $550 a pop to receive.

Young came to the attention of the authorities several times, but always managed to wriggle out of trouble. That is, until 2014, when he was arrested and charged with practising medicine without a license and fraud. In February last year, he was found guilty, but a hung jury caused complications when they voted 11-1 to convict on the two medical charges, but deadlocked 8-4 on fraud charges.

Finally, at the end of June 2017, he was sentenced. He was given three years, eight months in custody, but due to the time he’s already spent in custody and under house arrest, he’s likely to actually serve five months in jail.

He admitted that he illegally treated patients at his luxury Valley Center ranch without any medical or scientific training. Perhaps best of all, he was also made to publicly declare that he is not microbiologist, hematologist, medical doctor or trained scientist, and that he has no post-highschool educational degrees from any accredited school. 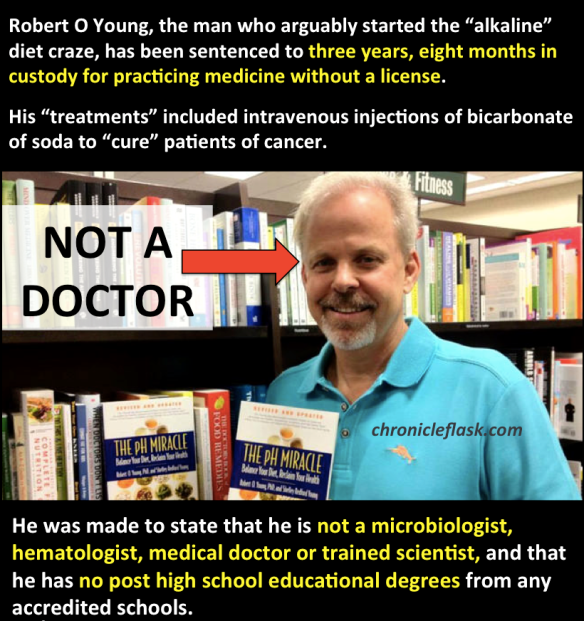 Prosecuting Deputy District Attorney Gina Darvas called Young the “Wizard of pHraud”, which is rather apt. Perhaps the titles on his books could be edited to read “Robert O Young, pHraud”?