2016 is limping to its painful conclusion, still tossing out last-minute nasty surprises like upturned thumb tacks in the last few metres of a marathon. But the year hasn’t been ALL bad. Some fun, and certainly interesting, things happened too. No, really, they did, honestly.

So with that in mind, let’s have a look back at 2016 for the Chronicle Flask….

January kicked off with a particularly egregious news headline in a well-known broadsheet newspaper: Sugar found in ketchup and Coke linked to breast cancer. Turns out that the sugar in question was fructose. Yes, the sugar that’s in practically everything, and certainly everything that’s come from a plant. So why did the newspaper in question choose ketchup and Coke for their headline instead of, oh, say, fruit juice or honey? Surely not just in an effort to sell a few more newspapers after the overindulgent New Year celebrations. Surely. 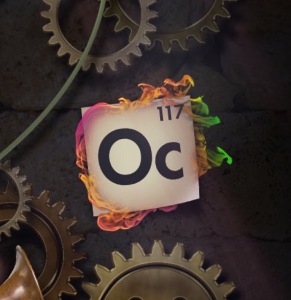 There was something more lighthearted to follow when IUPAC  verified the discoveries of elements 113, 115, 117 and 118. This kicked off lots of speculation about the elements’ eventual names, and the Chronicle Flask suggested that one of them should be named Octarine in honour of the late Sir Terry Pratchett. Amazingly, this suggestion really caught everyone’s imagination. It was picked up in the national press, and the associated petition got over 51 thousand signatures!

In February I wrote a post about the science of statues, following the news that a statue to commemorate Sir Terry Pratchett and his work had been approved by Salisbury City Council. Did you know that there was science in statues? Well there is, lots. Fun fact: the God of metalworking was called Hephaestus, and the Greeks placed dwarf-like statues of him near their Hearths – could this be where the fantasy trope of dwarves as blacksmiths originates? 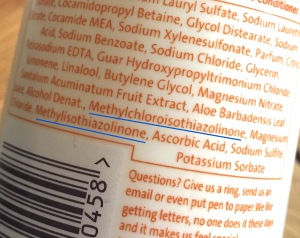 MCl and MI are common preservatives in cosmetic products

My skeptical side returned with a vengeance in March after I read some online reviews criticising a particular shampoo for containing a substance known as methylchloroisothiazolinone. So should you be scared of your shampoo? In short, no. Not unless you have a known allergy or particularly sensitive skin. Otherwise, feel free to the pick your shampoo based on the nicest bottle, the best smell, or the forlorn hope that it will actually thicken/straighten/brighten your hair as promised, even though they never, ever, ever do.

Nature Chemistry published Another Four Bricks in the Wall in April – a piece all about the potential names of new elements, partly written by yours truly. The month also brought a sinus infection. I made the most of this opportunity by writing about the cold cure that’s 5000 years old. See how I suffer for my lovely readers? You’re welcome.

In May I weighed in on all the nonsense out there about glyphosate (and, consequently, learned how to spell and pronounce glyphosate – turns out I’d been getting it wrong for ages). Is it dangerous? Nope, not really. The evidence suggests it’s pretty harmless and certainly a lot safer than most of its alternatives.

Something else happened in May: the Chronicle Flask’s Facebook page received this message in which one of my followers told me that my post on apricot kernels had deterred his mother from consuming them. This sort of thing makes it all worthwhile.

In June the names of the new elements were announced. Sadly, but not really very surprisingly, octarine was not among them. But element 118 was named oganesson and given the symbol Og. Now, officially, this was in recognition of the work of Professor Yuri Oganessian, but I for one couldn’t help but see a different reference. Mere coincidence? Surely not.

July brought another return to skepticism. This time, baby wipes, and in particular a brand that promise to be “chemical-free”. They’re not chemical-free. Nothing is chemical-free. This is a ridiculous label which shouldn’t be allowed (and yet, inexplicably, is still in use). It’s all made worse by the fact that Water Wipes contain a ‘natural preservative’ called grapefruit seed extract which, experiments have shown, only actually acts as a preservative when it’s contaminated with synthetic substances. Yep. Turns out some of Water Wipes claims are as stinky as the stuff they’re designed to clean up.

August brought the Olympics, and speculation was rife about what, exactly, was causing the swimming pools to turn such strange shades of green. Of course, the Chronicle Flask knew the correct solution…

August also saw MMS and CD reared their ugly heads on social media again. CD (chlorine dioxide) is, lest we forget, a type of bleach solution which certain individuals believe autistic children should be made to drink to ‘cure’ them. Worse, they believe such children should be forced to undergo daily enemas using CD solutions. I wrote a summary page on MMS (master mineral solution) and CD, as straight-up science companion to the commentary piece I wrote in 2015. 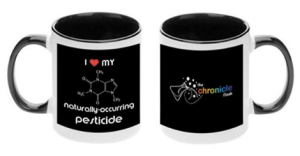 September took us back to pesticides, but this time with a more lighthearted feel. Did you know that 99.99% of all the pesticides you consume are naturally-occurring? Well, you do if you regularly read this blog. The Chronicle Flask, along with MugWow, also produced a lovely mug. It’s still for sale here, if you need a late Christmas present… (and if you use the code flask15 you’ll even get a discount!)

In October, fed up with endless arguments about the definition of the word ‘chemical’ I decided to settle the matter once and for all. Kind of. And following that theme I also wrote 8 Things Everyone Gets Wong About ‘Scary’ Chemicals for WhatCulture Science.

Just in case that wasn’t enough, I also wrote a chapter of a book on the missing science of superheroes in October. Hopefully we should see it in print in 2017.

Sparklers are most dangerous once they’ve gone out.

I decided to mark Fireworks Night in November by writing about glow sticks and sparklers. Which is riskier? The question may not be as straightforward as you’d imagine. This was followed by another WhatCulture Science piece, featuring some genuinely frightening substances: 10 Chemicals You Really Should Be Scared Of.

And that brings us to December, and this little summary. I hope you’ve enjoyed the blog this year – do tell your friends about it! Remember to follow @ChronicleFlask on Twitter and like fb.com/chronicleflask on Facebook – both get updated more or less daily.

Here’s wishing all my lovely readers a very Happy New Year – enjoy a drop of bubbly ethanol solution and be careful with the Armstrong’s mixture….

See you on the other side!