Glyphosate, the key ingredient in Monsanto’s weedkiller Roundup, has been in the news recently. A few weeks ago it was widely reported that a UN/WHO study had shown it was ‘unlikely to pose a carcinogenic risk to humans‘. But it then emerged that the chairman of the UN’s joint meeting on pesticide residues (who, incidentally, has the fabulous name of Professor Boobis) also runs the International Life Science Institute (ILSI). Which had received a $500,000 donation from Monsanto, and $528,500 from an industry group which represents Monsanto among others.

And then it transpired that there was going to be an EU relicensing vote on glyphosate two days after the (since postponed) UN/WHO report was released, which resulted in another outcry.

A molecule of glyphosate

So what is glyphosate, and why all the fuss?

It was first synthesized in 1950 by Swiss chemist Henry Martin. It was later, independently, discovered at Monsanto. Chemists there were looking at water-softening agents, and found that some of them also killed certain plants. A chemist called John E. Franz was asked to investigate further, and he went on to discover glyphosate. He famously received $5 for the patent.

Chemically, glyphosate is a fairly simple molecule. It’s similar in structure to amino acids, the building blocks of all proteins, in that it contains a carboxylic acid group (the COOH on the far right) and an amine group (the NH in the middle). In fact, glyphosate is most similar to the smallest of all amino acids, glycine. Where it deviates is the phosphonic group (PO(OH2)) on the left. This makes it a (deep breath) aminophosphonic analogue of glycine. Try saying that when you’ve had a couple of beers.

As is usually the way in chemistry, changing (or indeed adding) a few atoms makes a dramatic difference to the way the molecule interacts with living systems. While glycine is more or less harmless, and is in fact a key component of proteins, glyphosate is a herbicide.

This probably bears stressing. It’s a herbicide. Not an insecticide. A herbicide.

Glyphosate is a herbicide, not an insecticide.

I say this because people often conflate the two – after all, they’re both chemicals you spray on plants, right? – but they are rather different beasts. Insecticides, as the name suggests, are designed to kill insects. The potential problem being that other things eat those creatures, and if we’re not careful, the insecticide can end up in places it wasn’t expected to end up, and do things it wasn’t expected to do. This famously happened with DDT, a very effective pesticide which unfortunately also had catastrophic effects on certain predatory birds when they ate the animals that had eaten the slightly smaller animals which had eaten the insects that had eaten the other insects (and so on) that had been exposed to the DDT.

Herbicides, on the other hand, kill plants. Specifically, weeds. They’re designed to work on the biological systems in plants, not animals. Often, they have no place to bind in animals and so are simply excreted in urine and faeces, unchanged. Also, since plants aren’t generally known for getting up and wandering away from the field in which they’re growing, herbicide sprays tend to stay more or less where they’re put (unless there’s contamination of waterways, but this can – and should, if the correct procedures are followed – be fairly easily avoided).

Now this is not to say we should be careless with herbicides, or that they’re entirely harmless to humans and other animal species, but we can cautiously say that, in general, they’re rather less harmful than insecticides. In fact, glyphosate in particular is less harmful than a lot of everyday substances. If we simply look at LD50 values (the amount of chemical needed to provide a lethal dose to half of a test population), glyphosate has an LD50 of 4900 mg/kg whereas, for comparison, table salt has an LD50 of 3000. Paracetamol (acetaminophen) has an LD50 of 338, and nicotine (a very effective insecticide, as well as being the active ingredient in cigarettes) has an LD50 of just 9.

Of course, there’s more to toxicity than just killing things, and that’s where it gets tricky. Yes, it might take more than a third of a kilo to kill you outright, but could a smaller amount, particularly over an extended period of time, have more subtle health effects?

But before we go any further down that rabbit hole, let’s take a look at that ‘smaller amount’. Certain campaigners (they always seem to have some sort of stake in the huge business that is organic food, ahem) would have us believe that food crops are ‘drenched’ in glyphosate, and that consumers are eating significant quantities of it every day.

Here’s a great graphic, made by Sarah Shultz of the Nurse Loves Farmer blog (reproduced with her kind permission), that answers this question nice and succinctly:

How much glyphosate is sprayed on crops? (Reproduced with permission of Sarah Shultz)

It’s about 1 can of soda’s worth per acre. Or, if you find an acre hard to visualise, roughly ten drops for every one hundred square feet – the size of a smallish bedroom.

In other words, not a lot. It’s also worth remembering that although there is some pre-harvest spraying – particularly of wheat crops – no farmer is spraying their crops five minutes before harvest. What would be the point of that? Farmers have margins, just like any other business, and chemicals cost money. If you’re going to use them, you use them in the most efficient way you can. The point of spraying pre-harvest is to kill any weeds that might be present so that they don’t get into your harvest. This takes time to happen, so it’s done seven to fourteen days before harvesting takes place. It’s also carefully timed in the growing cycle. Once wheat turns yellow, it’s effectively dead – it’s neither photosynthesising nor transporting nutrients – so if it’s sprayed at this point, glyphosate isn’t moved from the plant into the grain of the wheat. Which means it doesn’t make it into your food.

The long and short of all this is that if there IS any glyphosate in food crops, it’s in the parts per billion range. So is that likely to be harmful?

In March 2015 the International Agency for Research on Cancer (IARC) – the cancer-research arm of the World Health Organisation – announced that glyphosate was ‘probably carcinogenic to humans’, or category 2A. It needs to be pointed out that this outcome was controversial, as this post by The Risk Monger explains. But even that controversy aside, lots of things fall into category 2A, for example smoke from wood-burning fires, red meat, and even shift work. The IARC did note that the evidence mainly involved small studies and concerned people that worked with glyphosate, not the general public, and that recommendations were partly influenced by the results of animal studies (really, go and read that Risk Monger post). The one large-cohort study, following thousands of farmers, found no increased risk.

And by the way, alcohol has been classified as a Group 1 carcinogen, meaning it’s definitely known to cause cancer in humans. If you’re worried about glyphosate in wine and beer, I respectfully suggest you have your priorities the wrong way round.

So, the tiny traces of glyphosate that might be on food definitely aren’t going to poison you or give you cancer. Are there any other health effects? 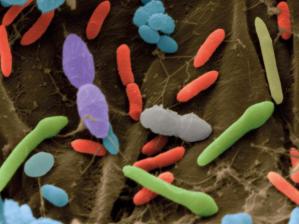 One thing that the health campaigners like to talk about is gut health. Their logic, such as it is, follows that glyphosate passes though our body largely unchanged. Now, you might imagine this would be a good thing, but according to these particular corners of the internet, it’s exactly the opposite. Glyphosate is known to be anti-microbial, and since it’s not changed as it passes through the body, the argument goes that it gets into our guts and starts wiping out the microbes in our digestive system, which have been increasingly linked to a number of important health conditions.

It sort of makes sense, but does it have any basis in fact? Although glyphosate can act as an antimicrobial in fairly large quantities in a petri dish in a laboratory, it doesn’t have a significant effect in the parts per billion quantities that might make their way to your gut from food. Glyphosate prevents bacteria from synthesising certain essential amino acids (it does the same thing to plants; that’s basically how it works) but in the gut these bacteria aren’t generally synthesising those amino acids, because they don’t need to. The amino acids are already there in fairly large quantities; bacteria don’t waste energy making something that’s readily available. In short, glyphosate stops bacteria doing something they weren’t doing anyway. So no, no real basis in fact.

I have so far avoided mentioning GMOs, or genetically-modified organisms. “GMO” often gets muttered in the same breath as glyphosate because certain crops have been modified to resist glyphosate. If they weren’t, it would damage them, too. So the argument goes that more glyphosate is used on those crops, and if you eat them, you’ll be exposed to more of it. But, as I said earlier, farmers don’t throw chemicals around for fun. It costs them money. Plus, not-really-surprisingly-if-you-think-about-it, farmers are usually quite environmentally-conscious. After all their livelihood relies on it! Most of them use multiple, non-chemical methods to control weeds, and then just add the smallest amount of herbicide they can possibly get away with to manage the last few stragglers.

Ah, but even a little bit is too much, you say? Why not eat organic food? Then there will be absolutely no nasty chemicals at all. Well, except for the herbicides that are approved for use in organic farming, and all the other approved chemicals, famously copper sulfate and elemental sulfur, both of which are considerably more toxic than glyphosate by anyone’s measure. And, of course, organic food is much more expensive, and simply not a feasible way of feeding over seven billion people. Perhaps, instead of giving farmers a hard time over ‘intensive’ farming, we should be supporting a mixture of sustainable methods with a little bit of, safe, chemical help where necessary?

In summary, the evidence suggests that glyphosate is pretty safe. Consuming the tiny traces that might be present in food is not going to give you cancer, won’t cause some sort of mysterious ‘leaky gut’ and it’s definitely not to poison you. There is a lot of fuss about glyphosate, but it’s really not warranted. Have another slice of toast.

After I wrote this post, a very interesting article came my way…