Yesterday we received the exciting news that a statue to commemorate Sir Terry Pratchett and his work has been approved by Salisbury City Council. Hurrah! So, even if we don’t quite manage to get octarine into the periodic table (and thus into every science textbook for ever more), it’s looking very likely that there will still be something permanent to help keep his memory alive.

Bronze, I hear you say, what’s that good for apart from, well, statues? And maybe bells? Is it really that interesting?

Well, let’s see. Bronze is an alloy. Alloys are mixtures that contain at least one metal, but they’re stranger than the word ‘mixture’ might perhaps suggest. Imagine combining, say, sand and stones. You still be able to see the sand. You could see the stones. You could, if you could be bothered to do it, separate them out again. And you’d expect the mixture to behave like, well, stony sand.

Alloys aren’t like this. Alloys (other well-known examples include steel, brass and that silver-coloured stuff dentists use for filling teeth) look, on all but the atomic level, like pure metals. They’re bendy and shiny, they make pleasing ringing sounds when you hit them and they’re good electrical conductors. And unlike more simple mixtures, they’re difficult (though not impossible) to separate back into their constituents.

Perhaps the most interesting this about alloys is that their properties are often very different to any of the elements that went into making them. Bronze, in particular, is harder than either tin or copper, and hence The Bronze Age is so historically significant. Copper is one of the few metals that can (just about) be found in its pure form, and so is one of the oldest elements we know, going back at least as far as 9000 BC. But while quite pretty to look at, copper isn’t ideal for making tools, being fairly soft and not great at keeping an edge. Bronze, on the other hand, is much more durable, and was therefore a much better choice for for building materials, armour and, of course, weapons. (War, what is it good for? Er, the development of new materials?) 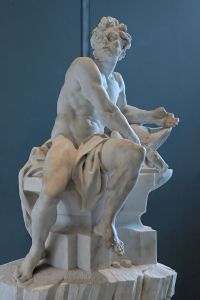 Hephaestus was the God of metalworking. According to legend he was lame, could it have been because of exposure to arsenic fumes?

Today we (well, chemists anyway) think of bronze as being an alloy of tin and copper, but the earliest bronzes were made with arsenic, copper ores often being naturally contaminated with this element. Arsenical bronzes can be work-hardened, and the arsenic could, if the quantities were right, also produce a pleasing a silvery sheen on the finished object. Unfortunately, arsenic vaporises at below the melting point of bronze, producing poisonous fumes which attacked eyes, lungs and skin. We know now that it also causes peripheral neuropathy, which might be behind the historical legends of lame smiths, for example Hephaestus, the Greek God of smiths. Interestingly, the Greeks frequently placed small dwarf-like statues of Hephaestus near their hearths, and this is might be where the idea of dwarves as blacksmiths and metalworkers originates.

Tin bronze required a little more know-how (not to mention trade negotiations) than arsenical bronze, since tin very rarely turns up mixed with copper in nature. But it had several advantages. The tin fumes weren’t toxic and, if you knew what you were doing, the alloying process could be more easily controlled. The resulting alloy was also stronger and easier to cast. 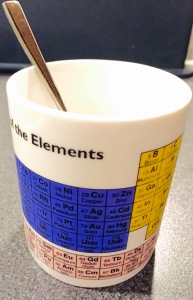 Of course, as we all know, bronze ultimately gave way to iron. Bronze is actually harder than wrought iron, but iron was considerably easier to find and simpler to process into useful metal. Steel, which came later, ultimately combined superior strength with a relatively lower cost and, in the early 20th century, corrosion resistance. And that’s why the teaspoon sitting in my mug is made of stainless steel and not some other metal.

Bronze has a relatively limited number of uses today, being a heavy and expensive metal, but it is still used to make statues, where heaviness and costliness aren’t necessarily bad things (unless, of course, someone pinches the statue and melts it down – an unfortunately common occurrence with ancient works). It has the advantages of being ductile and extremely corrosion resistant; ideal for something that’s going to sit outside in all weathers. A little black copper oxide will form on its surface over time, and eventually green copper carbonate, but this is superficial and it’s a really long time before any fine details are lost. In addition, bronze’s hardness and ductility means that any pointy bits probably won’t snap off under the weight of the two-millionth pigeon.

So how are bronze statues made? For this I asked Paul Kidby, who designed the concept art for the statue. He told me that he sculpts in Chavant, which is an oil-based clay. It’s lighter than normal clay and, crucially, resists shrinking and cracking. He then sends his finished work away to be cast in bronze at a UK foundry, where they make a mould of his statue and from that, ultimately (skipping over multiple steps), a bronze copy. Bronze has another nifty property, in that it expands slightly just before it sets. This means it fills the finest details of moulds which produces a very precise finish. Conveniently, the metal shrinks again as it cools, making the mould easy to remove.

And just for completeness, Paul also told me that the base of the statue will most likely be polished granite, water jet cut with the design of the Discworld sitting on the back of Great A’Tuin. I can just imagine it – it’s going to be beautiful.

8 thoughts on “Feet of clay? The science of statues”