The other day, thanks to an expedition to the swimming pool, I found myself drying my hair twice in one day. As I did so it occurred to me that the process was a lot faster at home with my old, battered hair dryer that it had been in the pool changing rooms.

I pondered variables (what can I say, I’m a scientist). I hadn’t washed my hair at the pool, I’d just rinsed it (hence the need to wash it again later) which meant no shampoo and, critically, no conditioner. Does conditioner’s presumably slightly hydrophobic nature help your hair to shrug off extra moisture? This didn’t seem like it ought to make that much difference. It seemed much more likely that the difference was simply due to the hair dryer itself. 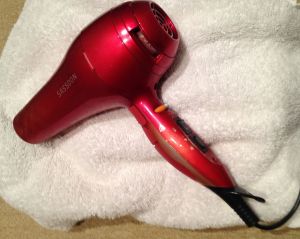 And this got me thinking about the nature of my much-loved, rather battered, bright red hair dryer.

I’m going to ‘fess up here. I didn’t buy this hair dryer because I’d carefully researched its specifications and features and decided it was the best model for the job. No, if I’m honest I bought it because it was red and all the others were boring black and silver. Rational eh?

However, I do remember something about this particular hair dryer, and you can just about see a reference to this feature on the photo. Namely, it apparently contains an “ionic generator”. The little dial that you can see in the middle of the photo (set to orange, which if I recall correctly means, ‘maximum ions’) apparently adjusts the ion levels.

At the time I did try to find out exactly what the technology might be. I recall it was difficult – there didn’t seem to be much information out there – and since to be honest I didn’t care that much so long as it dried my hair, and it wasn’t particularly expensive (and it was red, RED!) I bought it anyway.

It only takes a quick glance at Amazon to see that the idea has not gone away. There are lots of ‘ionic’ hair dryers on the market, making claims such as, “Ionic conditioning with 90 per cent more ions“, “Heat-balancing ionic technology for condition and shine and a frizz-free finish“, “stylish dryer with ionic technology–seals in moisture to the hair cuticle for increased shine and silky, glossy hair” and the simple “4X More Ions“.

Ok, well first of all what are ions? Whereas most people have a faint idea what atoms and molecules are, far fewer are confident to describe ions – despite the fact that they are firmly a part of the compulsory GCSE Science syllabus and were, of course, also included in  O-level Chemistry before that. Exactly why this should be is tricky to explain. Possibly it’s simply because ‘atoms’ and ‘molecules’ do occasionally crop up in everyday speech, whereas ions are that bit more obscure. Possibly it’s because children learn about atoms in the most basic terms quite early on, and come back to the idea regularly, but ions only turn up relatively briefly (unless, of course, you choose to study A-level Chemistry). There may be an element (hoho) of confusion over the fact that element 26 is called ‘iron’, which in most English accents sounds the same as ‘ion’. And just to really confound everyone, there are such things as iron ions.

But I think the most likely is that ions are a bit tricky to understand.

There, that was easy, wasn’t it?

What do you mean, what does ‘charged’ mean? It means they have either a positive or negative charge.

What do you mean, ‘what does that mean’?

Oh all right. All right. Back to basics. 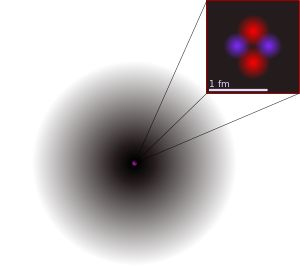 First of all we need to understand a bit about atoms. Atoms are made up of two parts. There is the nucleus, which is made up of protons and neutrons (except for hydrogen’s nucleus, which is just a proton) and then, whizzing around that, are electrons. Electrons are quite fiddly things that behave frankly very oddly. In particular, they don’t actually drift around atoms in stately orbits as shown in most diagrams. In fact, they are sort of there and sort of not-there at the same time, and chemists talk about an ‘electron cloud’ as a result. An electron cloud need not contain lots of electrons (this depends on the size of the atom) – it just describes an area where you might find one or more electrons.

Anyway, that’s all a bit complicated and for our purposes it doesn’t really matter – all we need to know is that there’s a nucleus in the middle and electrons around it.

Electrons have a negative charge, protons have a positive charge, and neutrons have no charge. It’s quite difficult to rigorously define what I mean by ‘charge’ without getting into some tricky maths and physics. If you are ok with the idea of negative numbers (who hasn’t had an overdraft at some point or another?) then think of it like this: electrons are -1 and protons are +1 (and neutrons are 0). If you have one proton and one electron, the overall ‘balance’ is zero – their charges cancel each other out. In the case of helium, there are two protons and two electrons. This neat bit of balancing is no accident: it’s the case for all atoms. Carbon has 6 protons and 6 electrons. Oxygen has 8 protons and 8 electrons. Calcium has 20 protons and 20 electrons, and so on.

If the electrons and protons aren’t balanced for some reason (usually as a result of a chemical reaction) then the thing that you were calling an atom a moment ago stops being an atom and becomes, wait for it….

Oxygen atoms have 8 protons and 8 electrons, but oxygen ions (properly called oxide ions) have 8 protons and 10 electrons. Which means they have a bit more minus than plus. They are, if you like, a bit overdrawn. If you add it up, you find the number works out as -2. And so we say that oxide ions have a charge of -2, and chemists (who are lazy) write this as O2-. Which is not, we must be careful here, the same thing as O2. That means two oxygen atoms joined together, to make an oxygen molecule. What do you mean it’s confusing?

Where have we got to? Ions are charged particles, and that means that they either have a positive charge or a negative charge. These charges are typically between 1 and 3, positive or negative. 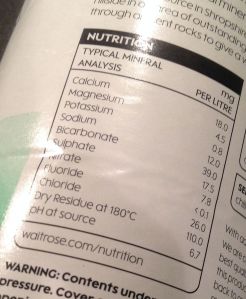 Ions are very important, because they form during chemical reactions and many everyday substances are made up of ions. For example table salt, sodium chloride, is made up of Cl– ions and Na+ ions.

Tap water, and indeed bottled water, are full of ions. Tap water has chloride ions (chlorinated water is a jolly good thing, assuming you don’t want typhoid, and is definitely not harmful regardless of what your nearest quack might try and tell you). It might also have fluoride ions, which are also very good for your general health (again, there’s lots of nonsense spread about this). Both tap and mineral water usually contain some sodium ions and some calcium ions. The ion balance does affect the taste – the more sodium there is the more salty the water tastes, for example – but that’s about it really. The ions don’t give the water any special properties except, perhaps, the ability to conduct electricity (which pure water, as in just H2O, actually does really badly).

Having explained ions, let’s get back to hair dryers for a moment. Ionic hair dryers claim to produce streams of negatively-charged ions. They usually claim to use something like the mineral tourmaline to do this, but despite much searching I struggled to find out much about how this was supposed to work or, most crucially, what the negative ions actually are. Negative ions are not a thing in and of themselves. They must be ions formed from atoms, so which element? Or elements?

After much hunting I eventually came upon an interesting piece written by Andrew Alden, at about.com. He explains that tourmaline has an interesting trick called pyroelectricity, which means that it does become charged when heated. The ancient Greeks even knew about this: in 314 BC Theoprastus noticed that tourmaline (called lyngourion at the time) attracted sawdust and bits of straw when heated.

Ed Trollope, from Things We Don’t Know, helpfully explained this pyroelectric effect as follows: the crystal structure of tourmaline becomes polarised (in other words the charges already in the structure become unevenly distributed) if you change its temperature. This results in a voltage across the crystal, which in turn leads to a small current being generated.

But I’m still unclear what the ions, if they exist, actually are. And the problem is that if you search for this, the first umpteen links are all pure and utter nonsense. Tourmaline is a complicated mineral that contains a whole host of different metal ions as well as oxygen, OH– (hydroxide) and fluorine. Does it produce oxide ions, O2-? These are very reactive and wouldn’t hang around for any useful length of time. And if they did they would surely be harmful. Presumably they would cause the production of ozone (definitely not a good thing). Are the manufacturers using the word ‘ions’ when they actually mean ‘electrons’? They are not the same thing of course, but perhaps ‘ions’ seemed like a friendlier word.

Electrons would reduce static in your hair, but then static is short-lived anyway. Would it speed up drying time? None of the explanations I’ve actually seen for this including, most memorably, “The negative ions break down water molecules to one-fifth of their size” (errrr, what?), provide a really satisfactory, scientific explanation as to why it should. Or why it should ‘seal water into the hair’, whatever that means. It is feasible that the reduction of static could help keep the hair strands separate, which might help, but surely brushing or even running your fingers through your hair would have a much bigger effect. What I’m also not clear on is whether the tourmaline in your hair dryer carries on producing streams of ions/electrons indefinitely, or whether it becomes degraded over time. Which you would expect, if the charged particles are coming from the tourmaline itself. Is my battered old hair dryer really doing anything at all anymore, if it ever did?

It’s all very unsatisfactory. My best guess? Ionic hair dryers do reduce static build-up in hair, which would leave it smoother immediately after drying. Conditioner and styling products will also help with this mind you, and will probably have a more significant effect. The rest, I strongly suspect, is pure woo. And my hair dryer dries my hair faster simply because it runs hotter and with a faster airflow than the cheap, basic models in the swimming pool changing rooms.

But if you know better, I’d genuinely love to hear from you.