It’s come up before of course, but there’s a lot of chemistry in cooking. I do like tinkering with recipes: all that lovely weighing things on digital scales, measuring liquids, working out ratios and tweaking the exact sequence of steps – what more could a chemist want? I spent ages working on my chocolate brownie recipe when I should have been writing up my PhD thesis (it does produce excellent chocolate brownies, so I maintain it was a entirely valid use of my time).

Last week fate transpired to drop more than one reference to ‘biscuits’ in my lap. Now, these were American sources, so I was aware that they weren’t talking about what we call biscuits (and Americans call cookies), not least because in one of them there was talk of making a ‘biscuit sandwich’ that included sausage. Now, I like a chocolate digestive as much as the next person, but I wouldn’t slap a chunk of grilled pork product in between two of them and call it breakfast.

So I decided to try and find a recipe. And, after a bit of faffing around converting Fahrenheit to Celsius and cups to grams (honestly, I do understand the principle of cups and baking by ratio, but is it really easier to measure out a cup of butter than just use scales?) I finally came up with a workable recipe.

Turns out American biscuits are basically sugar-less scones. Who knew.

What’s the chemistry connection? Well, just like scones, the raising agent in American biscuits is baking soda, or sodium hydrogen carbonate. It causes the mixture to rise because it does this when it’s heated:

This type of reaction is called thermal decomposition, because the heat is causing the sodium hydrogen carbonate (NaHCO3) to break apart. The carbon dioxide (CO2) is a gas and produces lots of lovely bubbles that make your finished product nice and light.  Water (H2O) is also a product, which helps to keep everything nice and moist.

This clever bit of cookery chemistry starts to happen slowly at 50 oC, but once you get over 200 oC (a more typical baking temperature) it’s pretty fast. So much so that you can bake your biscuits for just 12 minutes or so and they’ll be perfectly risen. Contrary to common belief, there’s no need to add some kind of acid to the mixture (buttermilk is often mentioned). Acids do react with carbonates to produce carbon dioxide, but there’s no need – heat will do the job for you. 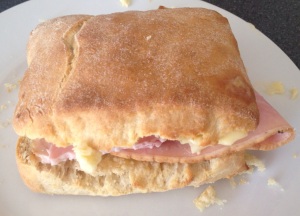 So without further ado, here’s my tinkered recipe. It’s really great this, it literally only takes 10 minutes plus baking time, and you probably have all these ingredients already:

(*If you prefer to use a jug this is as close to 230 ml as makes no difference, since milk is mostly water and water has a density of 1 g/ml, but it saves washing up to just stick the bowl on the scales and weigh it.)

Split the biscuits in half and fill them with anything you like, savoury or sweet. They’re delicious served plain with lashings of butter. As a more substantial lunchtime snack, try cheese and ham. Lemon curd has also proved a favourite. If you have leftovers they will keep until the next day if wrapped up, and are especially nice toasted and buttered.

And there you are, a metric version of the classic American biscuit recipe, with a bit of chemistry thrown in. I think this might be a first. Heston eat your heart out.