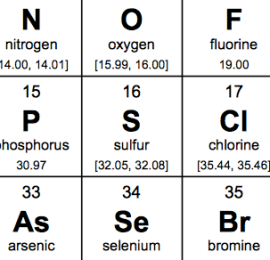 IUPAC says sulfur, and what they say goes

I found myself yet again discussing the correct spelling of the name of element number 16 today with a group of students. Now, on the one hand, going over this again and again is a tad wearisome. On the other, I’m quietly glad that in a time in which the media constantly blather on about terrible literacy levels, rant about the use of txt spk and generally mutter under their (or there/theyre/one of those) breath about the inability of the nation to use an apostrophe properly, I can consistently find an entire roomful of youngsters who care so much about spelling that they’re willing to argue over the correct use of ‘f’ vs. ‘ph’.

I am, of course, talking about sulfur.

You will note that I have spelled it with an ‘f’.  I should point out that the spelling chequer* on my browser has just underlined that with a row of red dots. It disagrees with me as well.

However, IUPAC (The International Union of Pure and Applied Chemistry – sounds like a fun place for a holiday doesn’t it?) do not, and in this they get the deciding vote. One of the many things IUPAC does is to sort out the official nomenclature of organic and inorganic molecules.

Of course, chemistry professors have been cheerfully ignoring them for years, and so it is that generations of chemistry students have tripped gaily into their first university session, fresh from A-level teachers using systematic names, to be immediately and thoroughly bamboozled by a lecturer talking about acetone, neopentane, para-nitrophenol and the gloriously-named glacial acetic acid.

But there it is, when it comes to element 16, IUPAC are crystal clear. It’s sulfur. With an f. That means it’s also sulfide with an f, and sulfate, with an f. Oh and sulfuric, as in the acid, with an f. Interestingly Richard Osman, on the BBC quiz show Pointless, has been very keen to point out in elements rounds that it’s sulfur, and then in a round about acids spelled it sulphuric. Weird.

In their notes, IUPAC even say that ‘”aluminum” and “cesium” are commonly used alternative spellings for “aluminium” and “caesium.”’ No such note is made for sulfur. Time to get over it. 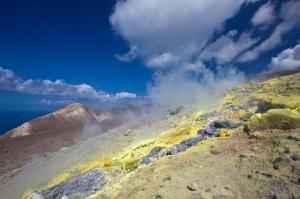 Volcanic sulfur – it looks prettier than it smells.

If the Online Etymology Dictionary is to be believed, the ph/f thing has gone backwards and forwards a few times. It was apparently sulphur in Latin, and sulfur in Late Latin. There was an Old English word ‘swefl’ meaning sulfur or brimstone (same thing really, just with more religious connotations), and an Old French one: ‘soufre‘. Actually, according to Google Translate, that’s the modern French spelling as well. I am pretty clueless when it comes to French, so feel free to correct me.

The UK started spelling the word with a ph in around the 14th century, along with several other words that have since fallen out of use, such as phantastic and turph. The ph makes some sense in words with a Greek origin, such as philosophy and orphan, since the Greek alphabet actually has the letter phi, but little sense otherwise. However the scribes of the time believed that the more letters there were in a word the more impressive it would look, so they made everything as long and complicated as possible. Why use f when you can use ph? Why spell it ‘tho’ when you can write ‘though’? And you also have them to blame for all those annoyingly unnecessary double consonants that turn up far from occasionally (I absolutely never get that one right first time).

If we’re honest, this belief still persists to some extent. True we don’t throw extra letters in for good measure any more, but there are plenty of sesquipedalianist writers out there who believe such behaviour makes them look intelligent (see what I did there?) And just look at how annoyed people get about text speak, or how many quietly sneer about tweeting.

So back to element 16. Chuck in a few more centuries and we come, more or less, full circle. IUPAC adopted the spelling sulfur in 1990, and the Royal Society of Chemistry Nomenclature Committee followed suit in 1992. The Qualifications and Curriculum Authority for England and Wales switched in 2000, and it’s now the spelling you will see in both GCSE and A-level examinations and, consequently, the one in any text book published within the last decade. For those that complain it’s an American spelling, even The Oxford Dictionaries admit that “In chemistry… the -f- spelling is now the standard form in all related words in the field in both British and US contexts.”

So it’s sulfur. With an f. It’s not “the American spelling”. Well, ok, it IS, but it’s also the British spelling. And the rest of the world’s spelling. So add sulfur to your spell checker’s dictionary and let’s move along.

* this is a joke. Probably not a very good one, since a number of people have pointed out my ‘mistake’. It’s never a good sign if you have to explain your attempts at humour is it? Anyway, it’s a reference to this famous (well I thought it was, anyway) poem.