I was planning a lesson on empirical formulas recently and, bored with the usual well-worn examples (hydrogen peroxide, ethene, ethanoic acid, yawn), went hunting for some unusual chemicals. So it was that I came across a substance with the molecular formula As4S4, which appealed to my immature side since – fellow chemists will be ahead of me here – it has the empirical formula of AsS. Heh. 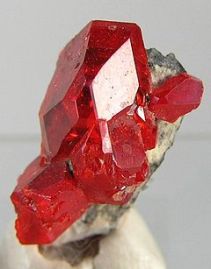 Anyway, turns out this stuff is interesting for more than just spelling a word that means bottom in American English. This particular form of arsenic sulfide is more commonly known as realgar, and for starters it’s very pretty: check out those lovely red crystals. In fact its other names are ‘ruby sulfur’ and ‘ruby of arsenic’.

It often turns up in the vicinity of other mineral deposits, such as lead, silver and gold ores, and has a long list of uses. It’s a source of arsenic, which is used to make gallium arsenide (formula GaAs – not quite as good, but credit for trying), an important semiconductor used in the production of integrated circuits, solar cells, and other electronics-y stuff.

Perhaps more interestingly, realgar used to be used by firework manufacturers to produce, somewhat counterintuitively, the colour white. It’s still used to make a contact explosive (who doesn’t love substances that spontaneously explode when touched?) At least, so says Wikipedia and numerous other pages that appear to have copied Wikipedia. I actually can’t find any more information on the chemistry of this particular substance – named as ‘red explosive’ – and if anyone knows I’d love to hear more.

What else? The Romans considered realgar valuable and used to trade it for use as a red paint pigment and in medicines. Which is ironic since, as a source of arsenic, it’s toxic and carcinogenic. Medieval Spaniards used it to kill rats, as did 16th century Brits. The Chinese call it xionghuang 雄黃, which translates to ‘masculine yellow’ (the related mineral orpiment, As2S3, is called cihuang 雌黃, or ‘feminine yellow’*) and used to use it as a handy insect- and snake-repellent. It turns up in traditional Chinese medicine, which isn’t particularly reassuring. Specifically, realgar is often added to treatments to reduce fever, inflammation, treat ulcers and calm skin conditions. Beware.

It’s also mixed with rice wine to make something called ‘realgar wine’ which is, rather alarmingly, still consumed during Duanwu Festival, also known as the Dragon Boat Festival, to ward off evil. And it’s not just adults: children’s foreheads and limbs are also traditionally painted with the stuff. Yikes. Apparently this practice started because Duanwu falls just before midsummer, and the hot weather used to precipitate the rampant spread of various diseases. Realgar was believed to be a universal antidote to poisons, and was great at warding off insects and other bothersome creatures: why not disease as well? It would appear that the use of realgar has declined somewhat, now that people have a better idea of the potential dangers. I hunted around and couldn’t find realgar wine explicitly available for sale anywhere, although it’s not difficult to find realgar itself. Be careful: even a one-off exposure can cause kidney failure.

So there we go: that stuff with the empirical formula AsS that’s traditionally used to ward off disease turns out to do the exact opposite, and cause illness. Still, the red crystals are very pretty. And if you do know anything about ‘red explosive’, please comment!

* Err, I hope. I’ve copy-pasted those symbols. Apologies if they actually say purple tadpole penis or something.