As a big fan of chemistry I like to encourage students to believe that it will be a huge force for good in the future, providing us with solutions to problems such as sustainable energy, currently incurable diseases and new materials.  And I hope I’m right about this.  But there’s no escaping the fact that chemistry has a dark, dirty and dangerous past.  In the days before health and safety – oh we take the mickey, but trust me you wouldn’t actually want to be without it – proper regulations and rigorous testing, chemists threw dangerous chemicals around like sweeties.  Quite literally in some cases.  They tasted and smelled toxic and dangerous substances and, worse, they released them on an unsuspecting population with barely a second thought. 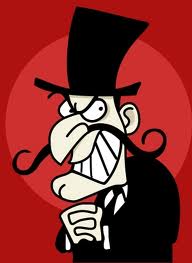 So with that in mind, who are my top three biggest baddies of chemistry’s past?

Fritz Haber (1868 – 1934)
The German chemist Fritz Haber gets the number three slot.  In some ways, he’s a bit of double-edged sword.  He did good along with the bad, inventing – along with Carl Bosch – the Haber Bosch process for making ammonia.  No matter what your feelings about inorganic fertilisers, we have to accept that without them we wouldn’t be able to feed the population of this country, let alone the world.  There just isn’t that much pooh out there.  Some people would argue that the population rise Haber’s process facilitated has been a disaster in itself.  But this is to conveniently forget that, had he not developed it, they probably wouldn’t be here to complain about it.

Haber wasn’t entirely a misunderstood genius though.  He’s also been described as the father of chemical warfare for his work on the use of chlorine and other poisonous gases during World War I.  His work included the development of gas mask filters, but he also led teams developing deadly chlorine gas used in trench warfare.  He was even there to supervise its release.  He was a patriotic German and believed he was doing the right thing, supporting his country in the war effort.  During the second world war Haber’s skills were initially sought out by the Nazis, who offered him special funding to continue his work on weapons.  However Haber was Jewish, so in common with other scientists in a similar position he ended up leaving Germany in 1933.

Famously, Haber’s first wife disagreed vehemently with his work on chemical warfare.  In fact, perhaps unable to cope with the fact that he had personally overseen the successful use of chlorine in 1915, she committed suicide by shooting herself with his service revolver.  That same morning, Haber left again to oversee gas release against the Russians, leaving behind his grieving 13 year-old son.

Haber was awarded the Nobel prize for Chemistry in 1919 for his work on the Haber Process.  So the story goes, other scientists at the ceremony refused to shake his hand in protest at his work with chemical weapons.  A tragic story all round.

Carl Wilhelm Scheele (1742 – 1786)
We’ve seen Scheele’s name come up before of course.  In his short – thanks to his bad habit of tasting and sniffing toxic chemicals – life he made a lot of chemical discoveries, but didn’t get the recognition for many of them because he always seemed to publish after someone else.  The ones he is remembered for always seem to be the horribly dangerous ones (maybe no one else wanted the credit).  For example he discovered hydrogen cyanide (a poison beloved of many an Agatha Christie villain, hydrogen fluoride (a highly toxic gas that forms the incredibly dangerous hydrofluoric acid when dissolved in water) and hydrogen sulfide (toxic, highly flammable and stinks of rotten eggs).

But his most harmful contribution to the world was undoubtedly Scheele’s Green, the arsenic-based yellow-green dye that was used to colour fabrics, paints, candles, toys and even, most tragically of all, foodstuffs in the 1800s.  It’s impossible to count but it was undoubtably responsible, directly and indirectly, for huge numbers of deaths in the 19th century.  Essentially he invented a deadly poison that ended up in thousands of homes all around the world.  Aren’t you glad we have safety testing these days?

Thomas Midgely (1889-1944)
Who was worse, Scheele or Midgely?  It’s a tough call, but I think Midgely takes it, particularly because he had some inkling exactly how damaging at least some of his work might turn out to be.

Midgely is famously responsible for synthesising the first CFC, freon.  CFCs, or chlorofluorocarbons, are neither toxic nor flammable, so were considered much safer than other propellants and refrigerants used at the time.  In fact, he was even awarded the Perkin Medal in 1937 for his work.  This, of course, was some time before the terrible consequences of CFCs were realised.  As we now know, they turned out to very damaging to the ozone layer, and in 1989 twelve European Community nations agreed to ban their production, and they have since been phased out across the world.

Although CFCs were a disaster, Midgely could at least be defended for having no way of knowing how disastrous they would ultimately turn out to be.  Not so for his other famous invention.  Whilst working at General Motors he discovered that adding tetraethyllead, or TEL, to petrol (aka gasoline) prevented ‘knocking‘ in internal combustion engines, which is when the air/fuel mixture ignites at slightly the wrong time.  Knocking makes the engine much less efficient, and so preventing it was a big issue.  You’d think Midgely might have accepted that lead in petrol was a bad idea when he had to take a vacation to recover from severe lead poisoning, but no.  In fact he appeared to have been pretty cynical about the whole thing, pouring TEL over his hands at a press conference in 1924 to demonstrate its apparent safety (its not, and he had to take more time off afterwards to recover).

Unfortunately burning fuel with TEL in it disperses lead into the air where it’s readily inhaled by innocent bystanders, and it’s particularly harmful to children.  Lead exposure has been linked to low IQ and antisocial behaviour, and recently researchers suggested that the ban on leaded petrol across the world in the early 2000s might now be leading to a reduced crime rate.

So for knowingly poisoning people worldwide with lead, and unknowingly taking out a chunk of the ozone layer, Midgely gets my award as biggest chemical baddy.

Would you pick someone else?

2 thoughts on “Chemical catastrophes – who were the biggest baddies of chemistry’s past?”